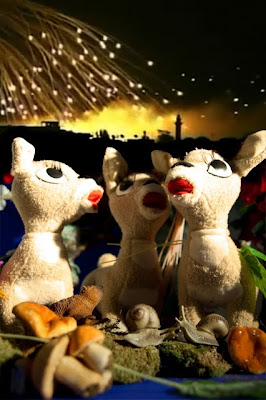 Similarly, the US and the UK dropped phosphorus bombs on Iraq, especially Fallujah.

Attuned to the irony that phosphorus bombs appear beautifully star-like in the air before they hit people on the ground and sensitive to the suffering of innocent civilians in these places--Athens-born, New York-based visual artist Lydia Venieri has created "Tomorrow ~ Phosphor Stars in White Nights."

Toy deer stare at the sparkling, violent explosions above them with alarm in this series of photographs on satin which show at the Venetia Kapernekas Gallery in New York CIty, from 16 December 2009 to 6 February 2010.


Tomorrow is a video featuring deers staring at an exploding sky while singing an altruistic and nostalgic song of friendship called "Tomorrow". The deers are chosen for their symbolic representation of suburban innocence and sacredness like the soul of a burnt forest. In the background, the night sky is lit up not by fire works, but by a deadly rain of phosphor bombs illegally dropped on the Gaza and Iraqi population.

While the deers sing "Tomorrow," Lydia Venieri adds a track of a young Israeli soldier’s voice. Although the soldier is defending his country in war, his conscience forces him to denounce the use of phosphor bombs, exemplifying the artist’s search for the embodiment of global human conscience.

The series "Phosphor Stars in White Nights" is derived from the video Tomorrow, where Venieri uses the allegory of the images of the deers with their wide open eyes, beating hearts and standing ears to continue her exploration of fear as transmitted and disseminated through the information apparatus of the media. In background, Gaza appears as if from a scene of One Thousand and One Nights.  In war’s nefarious festivity, Venieri plays again with juxtapositions: drawing her audience in with the dolls’ extreme innocence, then without mercy, taking them down the wrong path of the fairy tale where the dream becomes a nightmare.

Venieri is well known for her evocative sculpture installations, bridging mythology with current events. She combines humor with self-reflection on the human condition of our times, through characters taken from mythology, history, fairy tales and her daily life. In Venieri’s stories, dreams reinforce reality and reality reinforces dreams.

For the past eight years, Venieri has been using images of genocide, suicide bombings and the devastation caused by war pulled directly from the headlines of CNN and other news outlets to create hyper-realistic photographs.  The constructed photographs engage viewers in a world addressing technology and human perception, in relation to the dissemination of images and information.  Her work delves into the political, borders on the poetic, saturated with absurdity that leaves the viewer with plenty of questions and yet no concrete answers. Her work questions the media’s distortion of reality by how images of war and terror are represented, as she juxtaposes the photographs of war with seemingly naïve images of children’s dolls...

Currently she shows her work with Vanessa Quang Gallery in Paris, Stux Gallery in New York and Terra Tokyo Gallery in Tokyo.

Posted by TenThousandThings at 10:59 AM
Email ThisBlogThis!Share to TwitterShare to FacebookShare to Pinterest
Labels: art, civilian victims of military violence, Iraq, Palestine, peace

Also on Vimeo at

It's really disturbing to see the bombing and the Nara deers together!

Cool videos and I found her internet art at
htpp://www.venieri.com

There's another Venieri vidieo - but it's all greek to me :(