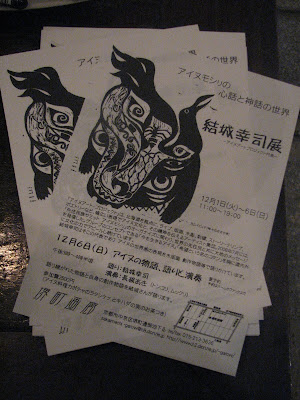 "Politics" is often a turn off for many people. Mastering the art of political discussion often involves access to control over media, and actions based on "realpolitik"concerns, rather than the real issues. Therefore, it is no wonder, that politics, often driven by its left hand, consumerism, many times leaves a bad taste in the mouth, breaking down vehicles of communication.

Keeping that in mind, the Ainu Art Project was formed to achieve what is considered a very political objective, the survivance of Ainu culture within Japanese society, through art that inspires people, encourages communication, and leaves a positive impression that lingers in the soul.

At a lecture at the Foundation for Research and Promotion of Ainu Culture in Tokyo, Kouji Yuki, one of the founders of the project, emphasized the importance of sustaining the activism of Ainu people like his father, whom he said fought constantly against an extremely difficult situation. The project's activism, however, comes to life in a different form- art. Realizing the power of art and culture in transforming negative stereotypes in society, the Ainu Art Project offers more than just a performance for the audience, but a glimpse Ainu people taking on their culture in various ways through their everyday lives. Kouji Yuki provides reggae as an example of a form of music that helped people through a difficult period and emerged as a status of "cool" amongst younger generations. In a Reuters interview he noted, "By using the important cultural tool of music instead of speaking to an audience from a stage, Ainu feelings can be communicated differently. I think it's very effective."

Voices has another excellent interview with Kouji Yuji, where he describes that through through coming to terms with his Ainu identity, the Ainu Art Project was born:


I was born in Hokkaido as an Ainu. During my childhood, discrimination against the Ainu took many forms. So, I did not like to be Ainu at all. I left home early for Tokyo hoping to have nothing to do with the Ainu. However, I could not escape from a burning question of who I am. When I heard that the Ainu People were building "Itaomachibu", Ainu"s traditional wooden ship, I came back to Hokkaido to join. While building the ship with friends young and old, I felt at home. I was deeply grateful for learning the wisdom of our ancestors. I enjoyed picturing us going to an open sea in this special ship.

However, the ship was actually sent to a museum. I was shocked. I was deeply sad to see the ship leaving our hands without even touching the ocean of our land. Our ship became a showpiece. I felt that the ship was dead not alive. At that moment, I asked myself again, "Who am I?" My response was "I am Ainu, not dead. I am living in this modern society." I did not want our culture to become only "good and old." I did not want our identity represented as a souvenir for tourists. I really wanted to carry our voices and expressions as Ainu from our generation. In 2000, three of us who worked together building the ship formed an artist group called the Ainu Art Project.

The Ainu Art Project will be displaying woodblock prints and embroidery work at Sakaimachi Garaw, a beautifully maintained machiya in the heart of Kyoto from December 1st through 6th from 11am-19pm. Machiya are known for their distinctive long shape that facilitated the business endeavors of merchants by opening up a space to display goods in the front of the house and a place to live in the back. 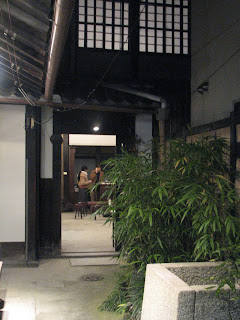 Each woodblock print encapsulates in one powerful image a story related to Ainu conceptions of coexistence with nature. All prints are available for purchase, and the print below, which will be welcomed into my home soon, reflects on Ainu origin mythology where the Ainu people were born from a union between a wolf and a goddess. 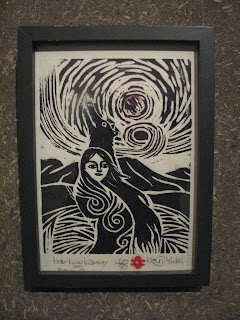 Although the wolf no longer exists in the lands of Japan it lives on
through the voice of this woman who continues to tell the wolf's story.

The week of art, expressing the Ainu in modern society, will culminate with Ainu storytelling and a talk led by woodblock print artist and Ainu Art Project founder Kouji Yuki, and a live performance by Nagane Aki on the tonkori and mukkuri, two Ainu instruments.

Entry is 2500yen. Kabocha Ratashikep, a traditional Ainu dish, and Ochatsuke flavored with the fruit of the Kihada tree, the only citrus fruit native to Hokkaido. 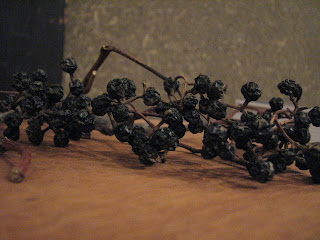 The fruit of the Kihada (ki =yellow hada =bark) tree, used extensively in traditional medicine, cooking, and in dyeing fabrics.

On another note, Oki and his tonkori will be funkin' up Kyoto Friday night at Club Metro at 10pm.

See you there!
- Jen Teeter