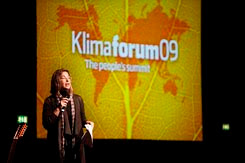 At the Klimaforum09, a parallel grassroots gathering in Copenhagen, Naomi Klein warned "The Copenhagen deal may turn into the worst kind of disaster capitalism," according to The Guardian.


"Down the road at the Bella Centre [where delegates are meeting] there is the worst case of disaster capitalism that we have ever witnessed. We know that what is being proposed in the Bella Centre doesn't even come close to the deal that is needed. We know the paltry emissions cuts that Obama has proposed; they're insulting. We're the ones who created this crisis... on the basic historical principle of polluters pays, we should pay."

Klein added that this is a chance to carry on building the new convergence of movements that began "all those years ago in Seattle, fighting against the privatisation of life itself".

Instead of addressing urgent climate change issues in good faith, many players are short-sightedly and selfishly focused on financially benefiting from a crisis that threatens planetary survival.

One example of the exploitation of climate change is REDD (carbon trading), which indigenous people call the "biggest land grab of all time." 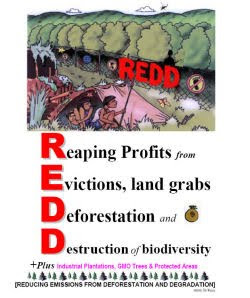 Members of the Indigenous Environmental Network, blogging from Copenhagen, are speaking against Reducing Emissions from Deforestation and Degradation (REDD) and the Clean Development Mechanisms (CDM) in the climate treaty: "REDD pilot projects, in which carbon in forests would be sold to industrialized societies as greenhouse gas pollution licenses, will sever the connections between Indigenous peoples and the forests they protect."

According to a must-read IEN publication, "Reaping Profits from Evictions, Land Grabs, Deforestation and the Destruction of Biodiversity, carbon trading (greenwashed as environmentalism) is one of the newest forms of expropriating territory and resources from indigenous peoples.

It's Getting Hot in Here: Dispatches from the Youth Climate Movement has details on the Danish government's leaked backroom deals (known as the "Danish Text") with other wealthy nations--first published in The Guardian, where it can be read in its entirety):


...the leaked text effectively kills the Kyoto Protocol and its emphasis on compliance and binding targets, while gutting much of the negotiations that have been underway over the last two years. Here’s a short summary of a few of the problems with the leaked text:

The Danish Text repeatedly refers to “the shared vision limiting global average temperature rise to a maximum of 2 degrees [Celsius] above pre-industrial levels.” This vision is certainly not shared - as the Pan-African Climate Justice Alliance stated yesterday, “according to the IPCC a two degree increase in the global mean temperature will mean a three or more degree increase for temperatures in Africa, [causing] 50% reduction in crop yields in some areas.”

The text also specifies that “developed country parties commit to deliver upfront public financing for 2010-201[2] corresponding on average to [10] billion USD annually for early action, capacity building, technology and strengthening adaptation and mitigation readiness in developing countries.” While this figure is still bracketed, the idea that the Global North is considering initially giving only $10 billion per year in mitigation funding to the Global South is viewed by many G-77 nations as a slap in the face – especially given that the governments of the Global North have spent over $4 trillion in the past two years on economic stimulus and bailouts of the banking and auto industries. (NOTE: In negotiating text, the brackets refer to sections that are still in negotiation.)

In one of the most controversial sections, the draft specifies that ”a Climate Fund be established as an operating entity of the Financial Mechanism of the Convention. … Support from the Fund may be channeled through multilateral institutions.” This is a key point that has been denounced by much of the Global South: this plan would take trillions of dollars in climate funding out of the hands of the U.N., and put it in the hands of multilateral institutions like the World Bank – which are effectively controlled by the U.S. and Europe.

The REDD (Reduced Emissions from Deforestation and Degradation) outline in the text allows intact, natural forests to be replaced by tree plantations and includes poor provisions for monitoring, reporting and no verification at all. Indigenous peoples – whose rights the U.S. is famously reluctant to respect, as one of four countries in the world to refuse to sign the UN Declaration on the Rights of Indigenous Peoples – are not even mentioned in the Danish Text. The unique rights of Indigenous peoples, and indeed human rights or climate justice in general, are not part of this backroom deal.

As expected, Martin Frid has a series of great posts from Japanese perspectives--with links to important Japanese and other Asian NGOs blogging from Copenhagen--and news about protesters challenging backroom deals along with a beautiful photo essay on his harvest this fall that reminds us of what's at stake).