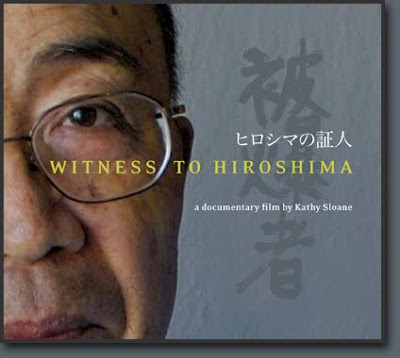 In the 16-minute film directed by Kathy Sloane, Witness to Hiroshima, Japanese citizen Keiji Tsuchiya uses 12 powerful watercolors to tell the story of his experiences in Hiroshima as a 17-year old soldier immediately following the dropping of the atomic bomb. While the film addresses a horrific moment in history, it emphasizes how Mr. Tsuchiya has directed his life toward purpose and healing through his lifelong commitments to advocating for atomic survivors, opposing nuclear war, and preserving the horseshoe crab.

Screenings of Witness to Hiroshima:

For tickets and more information: http://www.mvff.com

For tickets and more information: http://www.sdaff.org/festival/2010

Atomic Mom, directed by M.T. Silvia is a documentary about two women, both mothers, who have very different experiences of the atom bomb. After decades of silence, a daughter’s quest for truth leads to the exchange of an olive branch between an American scientist and a Hiroshima survivor.

For tickets and more information: http://www.mvff.com

(Many thanks to Michele Mason at the Department of East Asian Languages and Cultures at the University of Maryland, for sharing this information.)
Posted by TenThousandThings at 12:00 AM
Email ThisBlogThis!Share to TwitterShare to FacebookShare to Pinterest
Labels: films, global hibakusha, healing, Hiroshima, nuclear radiation, Nuclear-Free