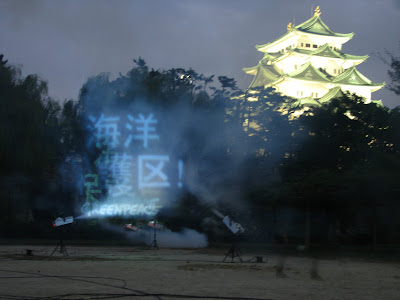 
In the opening ceremony of the CBD here in Nagoya, Japan, Japanese Environment Minister Matsumoto (also chair of the conference) reminded delegates that biodiversity is the legacy we will leave our children. Greenpeace is here at CBD COP10 to make sure that the legacy we leave our children is one that is sustainable and healthy.

One of the main focuses of Greenpeace’s work here is sustainable fisheries and oceans. The oceans are a source of food for so many people on Earth. Here in Nagoya, governments gathered here can help us to leave these future generations with food and life.

As the second day of negotiations here came to a close, the team from Greenpeace Japan, where I work, projected messages urging delegates to save life on Earth and rescue our oceans in front of Nagoya Castle. It was a unique cloud projection- photos and text displayed on an artificial cloud. The Nagoya Castle is a major tourist attraction here in Nagoya. The Greenpeace Japan team had spent much of the day passing out flyers about the projection and when they arrived, we invited them to sign our petition to create more marine reserves, areas of ocean off-limits to industrial activity: things like fishing and drilling for oil. There were many Japanese journalists at the projection also, which was good. Today, many people in Japan woke up to newspapers with the photo of the projection and the demand for marine reserves: something we hope the Japanese delegation also saw.

Nagoya is a city near the sea, a sea that must be protected. Greenpeace is campaigning for a network of marine reserves covering 40% of the world’s oceans. That goal can begin to become a reality here in Nagoya.

Nagoya is the host city of the Conference of Parties 9th Meeting on the Convention on Biological Diversity. For a full summary of Greenpeace's activities at COP10, click here.