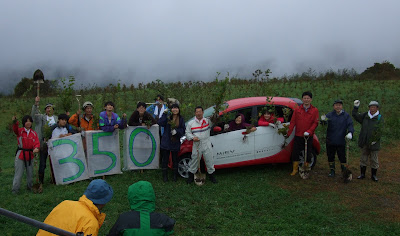 Over 7,347 events were held in 188 countries across the planet to encourage governments and communities to take action to reverse climate change as a part 350.org's Global Work Party.


Circle 10/10/10 on your calendar. That’s the date. The place is wherever you live. And the point is to do something that will help deal with global warming in your city or community.

We’re calling it a Global Work Party, with emphasis on both 'work' and 'party'. In Auckland, New Zealand, they’re having a giant bike fix-up day, to get every bicycle in the city back on the road. In the Maldives, they’re putting up solar panels on the President’s office. In Kampala, Uganda, they're going to plant thousands of trees, and in Bolivia they’re installing solar stoves for a massive carbon neutral picnic.

Campaigners from 350.org have convinced the Obama administration to reinstall solar panels on the White House after rejecting 350.org's first proposal. The Reagan Administration removed solar panels erected on the White House by former climate-minded U.S. President Jimmy Carter. The Mexican government has also agreed to reduce CO2 emissions by 10%.

With October 10th being just a little over a week before the tenth ordinary meeting of the Conference of the Parties to the Convention on Biological Diversity (COP10) being held in Nagoya which will cover the adverse effects of climate change on biodiversity, actions in Japan were organized to urge the Japanese government to make stronger commitments to reducing CO2 emissions by transitioning to greener technologies. The tree planters in the photo above used electric vehicles to plant 100 beech trees on Mt. Kijihiki. Organizer Peter Howlett describes the solidarity event:


Our tree planting began by first meeting at Oshima-Ohno Station. (This will be the new Shinkansen Hakodate Station in 2015.) Planters were shuttled from here in Mitsubishi's new electric vehicle; i-MiEV up to the top of Mt. Kijihiki where we planted 100 beech trees. This photo was taken mid-planting. We chose Mt. Kijihiki because we are proposing the installing of a community wind farm (10-15 2000Kw turbines) on this mountaintop to power a Ride-the-Wind shuttle train to connect New Hakodate Station with old Hakodate Station (18km).

If such a delicate and difficult task as planting trees on a mountaintop can be achieved with the use of renewable energy-based technologies , surely with the proper sense of commitment and urgency, these technologies can be adapted in all aspects of our daily lives.

350. org organized a similar event last year to raise awareness of global CO2 emissions in October 2009 where 5,200 simultaneous demonstrations took place in 181 countries. CNN called it "the most widespread day of political action in the planet's history." With almost 7,350 events this year, it is clear that the movement to protect our earth from climate disaster is only growing stronger and stronger.