"Connections become obvious when we destroy them" Winifred Bird on Biodiversity 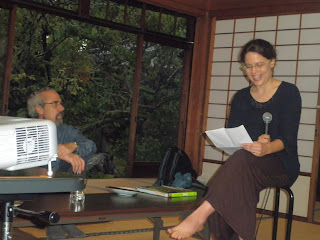 What does "biodiversity" mean to you and me? Is it just another catch phrase for the corporate world to use in the mass media?

Or is it more?

With the intricate gardens of Eiun-in Temple painting a rich landscape behind her, Winifred Bird, a writer for Kyoto Journal, shares her awakening to the deep interconnections between the biodiversity of the natural world and the seemingly disconnected experience of human beings in today's societies at the Kyoto Journal Biodiversity Special Launch Party.


I’ve been thinking a lot about biodiversity lately. Actually, since last summer, biodiversity has pretty much taken over my life. Partly that’s because I’ve been lucky enough to be working on this great special issue of Kyoto Journal, and partly for a couple of other projects. I guess you could say I’ve hopped on the COP10 media bandwagon, but the funny thing is, I sometimes still don’t feel like I have a firm grasp on what biodiversity actually is and why it matters. This could have something to do with the fact that I haven’t formally studied biology since tenth grade, but I think a lot of the general public is also pretty hazy on the term, if they’ve heard it at all. It’s not one of those easy-access words like “nature” or “open space” or even “extinction,” that you hear and just immediately visualize. It’s not even really about individual species – a panda here, a tiger there - it’s about the whole picture, how everything works together and is connected, and for me, that’s been a hard thing to get my head around because it’s just so huge. But I had a bit of a biodiversity breakthrough earlier this summer that I’d like to share with you.

Around July I had a lull in my writing work, so I went up to Gifu to help my husband out with a project he was doing there. He’s a carpenter, and he was building a cabin up in this vacation development way out in the mountains near Gujo Hachiman, and to cut costs we were camping at the worksite. It’s a vacation area, so during the week the place is a real ghost town, and it became our own little world. One morning, we’d set up our breakfast table, which was actually a plank balanced on top of some boxes, and we were sitting across from each other drinking our tea, and suddenly it was just like I had fallen inside a cheesy love song. It just struck me that we were made for each other. Not just on a personal level, but on a biological one, the level of elemental man and woman. We fit together perfectly and we literally can’t live without each other, in the sense that we need each other in order to procreate our species. And the amazing thing is that this not only works on a utilitarian level, but this interdependence is also incredibly beautiful. It’s not only procreation, but also love. And then it hit me really strong that the same thing is true for the whole world – that the fox and the rabbit, the flower and the bee, everything, is made for each other, everything fits together in the most immense and beautiful pattern.

Of course, it’s the most obvious of clichés to say that we’re all connected and that that every piece of the puzzle matters. These are things that I know on an intellectual level, as I’m sure you all do, but how often is it that we really feel that connection? How often does the pattern flash before our eyes in all its Technicolor complexity? I said a second ago that it’s completely obvious that everything is connected, but in another sense it’s not obvious at all. It’s not like the connections are visible, like a giant string net tying me to that tree to that cat to that mosquito. My basic instinct, admittedly as an American and someone who’s neither a biologist nor a Buddhist, is to think of myself as an independent unit, rather than as part of something larger, a part that doesn’t work when it’s isolated from that larger picture.

The connections become obvious, of course, when we destroy them. When we hunt all the sea otters and then the urchins that they used to feed on explode out of control and eat the kelp forests where they live down to the nub, and then the fish that breed in these kelp beds decline and we go fishing and there aren’t any fish out there, then we understand that nature is a network where every piece matters. The trick is to see it before we’ve destroyed it, to somehow raise our awareness enough to protect what we’re used to taking for granted.

I was talking to a scientist recently who gave me another example of how we often don’t become aware of the value of biodiversity until a disaster strikes. His name is Thomas Elmqvist, and he teaches natural resource management at the Stockholm Resilience Center at Stockholm University, and he’ll also be in Nagoya for COP 10 as part of the Swedish delegation. For about twenty years, Elmqvist has been studying a forest in Samoa where two different types of flying fox play a key role in dispersing seeds. Basically they eat tree fruit then drop the seeds throughout the forest. One species, the dominant one, did most of this work while the other was less abundant and played a fairly minor role in the forest.

In the early nineties, a major hurricane hit the forest and knocked down a lot of trees. What happened afterwards with the flying foxes is really fascinating. The dominant species went down to the forest floor to search for fallen fruit, and when these animals are on the ground they’re very slow, they kind of creep along, so this species was essentially wiped out by predators. Meanwhile, the subdominant species stayed up in the trees and survived by eating young leaves. When flowers and fruits started to appear in the remaining trees again, this formerly inconsequential flying fox was the one that was still around to carry on seed dispersal.

Elmqvist says he suspects that if there hadn’t been this diversity in the flying fox species – he calls it “response diversity within functional groups” – it’s quite likely many of the plant species in the forest would not have been propagated, and alien plant seeds would have blow in on the wind and been able to gain a foothold in the forest, possibly causing it to flip to a very different kind of environment. His point in telling this story was that diversity is what gives ecosystems their resilience when disaster inevitably strikes. It’s kind of like biodiversity is the ultimate life insurance policy: it ensures that in one form or another, life will go on.

But on a more basic level, what this story illustrates for me is that there is a whole lot of stuff going on in the natural world that I’m unaware of, yet completely dependent on for all sorts of goods and services. We don’t want to mess around out there too much. We don’t want to start saying, why do we need two kinds of flying fox? One is doing the job just fine. We’ve got to keep reminding ourselves of the limits to our own knowledge. At the same time we’ve got to keep trying to learn more and become more aware of how everything, including ourselves, is interrelated. Hopefully this issue of Kyoto Journal can be a part of that.