Anniversary of Okinawa Reversion: Locals attach 100 protest banners to fence surrounding land the U.S. Marines have earmarked for new base 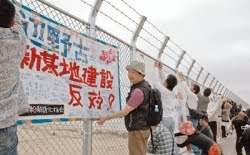 (Photo courtesy of the Okinawa Times)

This morning on the anniversary of the reversion of Okinawa, 150 people in protest attached 100 banners on the U.S. military fence towering over Henoko Bay surrounding the land earmarked for the "relocation" of Futenma Air Base. May 15th marks the 39th anniversary of the "return" of Okinawa to Japan, yet Okinawa remains in a de facto state of occupation as policy-makers in Tokyo and Washington, D.C. continue to ignore citizen cries to remove bases from Okinawa and to end the ceaseless co-option of pristine forest and sea-side for relocation of U.S. bases.

It has recently been brought to my attention, that when discussing the construction of the new base, military and governmental officials use the term "relocation," which gives the false impression that once Futenma is no longer used as an air base, the land Futenma is on will magically return to how it was before; that the destruction the base has caused on the ecosystem and on the Okinawan people will magically disappear. "Relocation" is used to hide the fact that Washington and Tokyo officials, at the expense of Okinawan people, are adding yet another military base to the list of over 800 U.S. bases around the world. As US for Okinawa expresses in a February 2011 press release, "To us, the promise being made to Okinawa sounds like telling a man you will give him back an arm you have cut off only as long as you can remove his leg."


Next is Okinawa Prefecture news. The U.S. military has finished erecting a fence at the seaside along Henoko Bay in Nago City. Today, civil organizations and fellow citizens participating in 5.15 Peace Walk, attached banners to the fence to protest the construction of a military base at the site.

The fence, which reaches as much as 4 meters-high, was completed on the beach which connects Henoko Bay to Camp Schwab. Citizens and local groups engaged in a sit-in on the 14th protesting the construction of a new base there, were joined on the 15th by more citizen groups and protesters participating in the Peace Walk to hang banners on the fence saying "NO" to bases in Okinawa.

Ashitomi Hiroshi, joint-representative of the Anti-helipad Construction Cooperative Group stated, "(Our action at this fence) is a good way to show everyone that the plan to relocate Futenma to Henoko will be a failure."

A similar Asahi News clip may be viewed here.

This is the 34th annual Okinawa Peace Walk. According to the Okinawan Times, participants started marching at 9am from Ginowan City Hall. They separated into two groups, one going to the north, one to the south, so as to surround Futenma Air Field. Around 2000 marchers will meet at 12:30 in Ginowan Beach Park to demand that the "Host Support Fund" being paid to the United States to occupy Okinawa be transferred to reconstruction efforts in Tohoku and that bases be removed from Okinawa. This is the first year that organizations outside of Okinawa were not invited to take part in the march. Organizers want to prioritize earthquake relief and show solidarity with earthquake and tsunami survivors whose suffering has been compounded by the nuclear disaster in Fukushima. The event which usually spans over three days, was shrunken to one this year

Today, solidarity demonstrations and actions will be taking place all across Japan to appeal to remove bases from Okinawa and terminate plans to construct helipads for the V-22 Osprey aircraft, which have already taken the lives of 30 people in the U.S. and 4 in Afghanistan.