Grace Lee Boggs calls for a revolution in cultural values: "What are we for, rather than what are we against?" 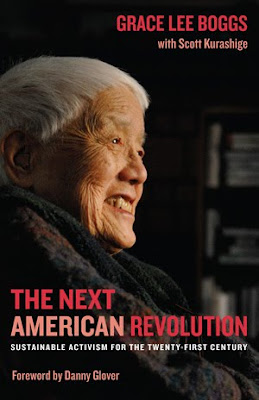 In this Democracy Now! interview, legendary peace & justice activist from Detroit, Grace Lee Boggs talks about the social and cultural openings unfolding in the wake of failures of our current economic system. Boggs, with DN!'s Juan Gonzalez, Harper'scolumnist Thomas Frank, and minister Jim Wallis, discuss the revolution in values Martin Luther King called for 50 years ago.

This Asia Pacific Forum (WBAI 99.5 FM) interview, "Making the World Anew," with Grace Lee Boggs and her co-author Scott Kurishige, focuses on their new book, The Next American Revolution: Sustainable Activism for the Twenty-first Century. The deep question the book addresses is "What are we for, rather than what are we against?"

The daughter of Chinese immigrants who lived in New York City, Boggs attended Barnard College on a scholarship, and received a PhD at Bryn Mawr, before embarking on a journey of lifelong advocacy of interconnected social justice and peace causes.

Her father ran a popular Chinese restaurant on Broadway, near Times Square. Despite all his success, in the 1920's, when he bought a house in Queens, he had to the put deed in the name of an Irish-American contractor because Asian-Americans were not allowed to own property.

Because of her experience with structural racism, Grace Lee Boggs came to identify with African American intellectuals and activists, the vanguard of all U.S. ethnic minority movements and leaders in global human rights and anti-colonial struggles during the 20th century.

In an interview with public broadcaster Bill Moyers in 2006, Boggs explained:


When I was growing up, Asians were so few and far between, they were almost invisible, so the idea of an Asian American movement was unthinkable. When I got my PhD in 1940, even department stores would come out and say, 'We don't hire Orientals, and so the idea of my getting a job teaching at a university was ridiculous.

Boggs tells us that we must remain aware our struggles for equality, dignity, justice and peace are part of an ancient humanistic tradition that is interconnected and global in scope. The philosopher-activist sees nonviolent grassroots social change as part of a "pilgrimage" that humans have undertaken for millennia.

Discussing her mentor, Dr. Martin Luther King, Boggs reminds us that King didn't just talk about civil rights. Similarly to Malcolm X and other anti-colonial activists of his time, King saw the American Civil Rights Movement as one piece of a global human rights movement challenging the violence and exploitation of hundreds of years of militarized colonialism. Boggs echoes King in telling us that our challenge is not one nation, but instead our challenge are the globally interconnected patterns of racism, materialism, violence, and militarism. As King emphasized, we can only address this dysfunctional and sick mindset by cultivating a "radical revolution of values" — spiritual, moral, creative, and human values — a revolution that begins inside ourselves.

Instead of despairing at what we're up against, Boggs sees hope for change by "bringing together small groups for a major cultural revolution" to address the monstrous growth of the military-industrial complex, the planetary environmental emergency, the plight of the marginalized and other related problems.

We must look for ways to "regain our humanity in little, practical ways." She recommends gardening, especially community gardening, as a means for us to remain connected with and become empowered by our beautiful, living, natural world. 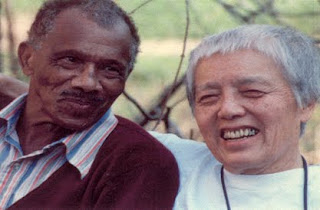 Grace Lee Boggs reminds us to stay focused and gain strength from being effective in our personal worlds and finding alternative ways to regain and expand control over our lives:


Do something local...Do something real, however small...There was a time when we thought if we just received political power, we could change everything...

But we have to begin new practices... engender discussions...community...dialogue...

We have to change the way we think...I think we have to rethink the concept of "leader" because the idea of "leader" implies power...

We need to appropriate the idea that we are the leaders we've been waiting for.