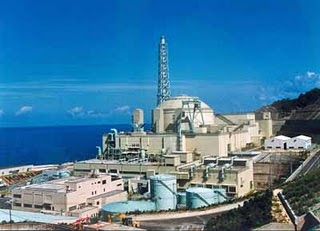 (The governor of Fukui prefecture allowed the fast experimental breeder nuclear reactor Monju to resume operation after a suspension of more than 14 years. It was shut down after its malfunctioning coolant system caused a fire. The problematic, decrepit reactor (ironically named after the Buddhist bodhisattva of wisdom) in Tsuruga, Fukui Prefecture, in western Japan, was activated on May 6. 2010.)

Two months after the tsunami and the explosion at Fukushima, the situation in Japan is still very dangerous, even if the corporate media is not reporting this. All over the country, earthquakes are still taking place, some of great intensity. Japanese people are very worried because of the radioactive contamination of air, ocean, potable water and agricultural soil. The ruined Fukushima Dai-Ichi nuclear plant will continue emitting this radiation for an indeterminable period.

This is why several groups have initiated a renewed campaign against nuclear energy: the first step towards definitive change on a worldwide scale. We are all connected by invisible links and share a common fate. Nuclear power is not only injurious, but also deadly. The people of Japan are asking for help to collect signatures from all over the world to convince their government to close all of Japan's nuclear plants.

During the past weeks, people worldwide signed a petition supporting the Japanese people's demand for the closure of Hamaoka nuclear plant which is located directly on a faultline manifesting seismic activity. On the sea, the plant is near the renowned geographical symbol of Japan: Mount Fuji. The petition cited the imminent risk of a nuclear explosion that could destroy the centre of Japan, including Tokyo.

On May 6th, Prime Minister Naoto Kan, announced that he requested the closure the Hamaoka plant. His administration also announced their decision to focus on the development of natural energy, rather than nuclear power.

However there are still more than fifty nuclear plants in Japan, some are at extreme risk. People in Japan say they must demonstrate the international support of their campaigns to close them, to be successful.

This website (mainly in Japanese) contains online petitions (in English, Spanish, French, and Russian) demanding the closure of other nuclear plants, starting with Monju, the most dangerous: http://www.page.sannet.ne.jp/stopthemonju/.

"Stop the Monju" has been working for many years to close the Monju nuclear plant in Fukui Prefecture. Here is their latest appeal:


Appeal To Everyone Around the World,

Now we are walking on the brink of an unfathomable catastrophe and we do not know what tomorrow will bring. This is because of the potential of the catastrophe at the Fukushima nuclear power plant and impending subsequent disaster. Already, a massive amount of radiation (several hundred thousand terabecquerel) has been released, and many people, including young children, have been exposed to radiation.

Fearing the coming of this day, many people throughout Japan have been working desperately, but despite these efforts, the tragedy at Fukushima was not prevented. It is truly disappointing.

At the same time, we feel outraged toward those who make the excuse that it was “unexpected”, and continue to promote nuclear power without reflecting at all, even with the reality that is in front of us. From now, radiation will contaminate the food, and the health of all citizens throughout Japan will be threatened whether we like it or not. In addition, it will also cause major losses in the economic world.

If an earthquake directly strikes the Hamaoka nuclear power plant, Monju, or the nuclear fuel reprocessing plant in Aomori Prefecture, it will be the end of this country. Everyone, shouldn’t we at least prevent that catastrophe from happening? It is not too late now. If we remain silent, for certain, the day of disaster comes closer. The energy will not be a problem without nuclear power.

Let us make the voice of “no nuclear power” into a big shape, and seek a change in policy. Please help to gather signatures so that we will never again expose more people to dangerous radiation leaks from nuclear plant accidents.

For more on Monju, please see:

• 2009 post: "Nuclear Industry Status Report 2009: The renaissance of nuclear energy is much exaggerated (with the possible exception of Monju)"

(The post pays tribute to the late Jinzaburo Takagi, founder of Tokyo-based Citizen's Nuclear Information Center (CNIC). The visionary activist and other Japanese citizens were able to temporarily compel the closure of the problematic Monju reactor after a notorious nuclear accident and attempted cover-up. Takagi also worked to legitimize the plight of Chernobyl victims who developed cancer, following an International Atomic Energy Association (IAEA )1991 report that claimed "radiation from the Chernobyl accident had almost no effect on the local population.")