The Asia-Pacific Journal: "What Price the Fukushima Meltdown? Comparing Chernobyl and Fukushima" 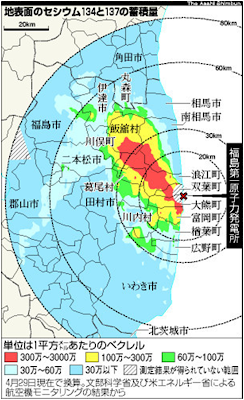 (A joint survey conducted by the Japanese and U.S. governments has produced a detailed map of ground surface radioactive contamination within an 80-kilometer radius of the Fukushima Daiichi nuclear power plant.))

Tokyo Electric Power Company, TEPCO, has now acknowledged the early meltdown of at least three reactors in the first multiple meltdown in nuclear history. Matthew Penney and Mark Selden have organized and assessed the contentious literature comparing Chernobyl and Fukushima in their recent article, "What Price the Fukushima Meltdown? Comparing Chernobyl and Fukushima," published at The Asia-Pacific Journal and republished at Truthout and Znet.

Along with Greenpeace on Twitter (gpjen) and Fukushima Update, Kyoto-based Green Action's blog, The Asia-Pacific Journal has been the best source of comprehensive in-depth investigative English-language reporting and analysis of the Fukushima Dai-ichi nuclear plant failure, attempted cover-ups, and radiation risks. APJ editors and contributors recognized early on the seriousness of the accident and radiation risks The online journal has published some fifty articles on Japan's 3.11 earthquake/tsunami/nuclear power disaster in the last three months and several more must-read pieces are in the works.

Penney and Selden conclude that Fukushima radiation exposure to school children is at the center of the debate; challenging the Japanese government's failure to "respond effectively to critics of policies that pose long-term risks to the nation’s children."

For updates, consider subscribing to APJ's free Weekly Newsletter announcing new articles, and visiting them on Facebook and Twitter.
Posted by TenThousandThings at 12:00 AM
Email ThisBlogThis!Share to TwitterShare to FacebookShare to Pinterest
Labels: 3/11, censorship, Chernobyl, children, Japan, nuclear radiation