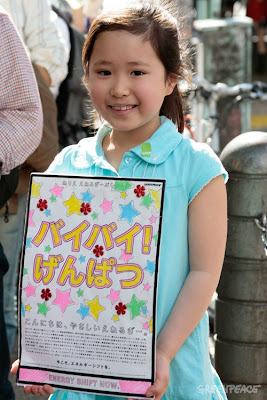 The nuclear disaster in Japan continues to unfold as Tokyo Electric Company (TEPCO) has also confirmed meltdowns in reactors 2 and 3, after just releasing information on May 15th that reactor 1 of the Fukushima power plant had indeed experienced a meltdown as early as 16 hours after the earthquake.

Koichi Nakano, a political scientist at Sophia University in Tokyo, told Reuters, "In the early stages of the crisis TEPCO may have wanted to avoid panic. Now people are used to the situation … nothing is resolved, but normal business has resumed in places like Tokyo."

The slow pace at which information is being released is hindering efforts to contain radiation and ensure that residents living in reach of contamination are evacuated to safe locations. Citizens across Japan and the world have been raising their voices against the continued use of nuclear power and the concealment of information (See photo essay on demonstrations against the proposed Kaminoseki nuclear plant in Seto Island, and Ten Thousand Things posts on marches in Jeju Island (Korea), Kyoto, Osaka, Shizuoka, and Tokyo (April 10th and May 7th ).

In response, Greenpeace asked the Japanese government for permission to conduct a survey of the radiation in the coasts surrounding Fukushima.The government only permitted them to survey the ocean 22 kilometers from the shore from May 3rd through 6th. With the help of local fishing cooperatives in Fukushima Prefecture and Miyagi prefecture, Greenpeace examined the levels of radioactive contamination present in marine life.

Here is a video of their activities near the Fukushima coast:

"We are talking here about long lived radioactive materials that might accumulate in the food chain and cause threats to the health of the Japanese people for the coming decades...Although the Japanese government gave us only very limited permission to do our marine research, we did find radioactive seaweed with alarming high levels of contamination." - Female Greenpeace Researcher

The results will be reported at a press conference on Thursday May 26, from 11:30-12:30 (Tokyo Time). For those unable to attend the press conference, it will be screened live at the following link: http://www.greenpeace.org/japan/ja/library/ustream/

Greenpeace is also collecting petition signatures online calling for:
The petition is in Japanese, but it is simple to add your name.
In order to prevent the next nuclear disaster, Greenpeace is also urging concerned individuals to email the boards of international banks that are funding the construction of a nuclear power plant in Jaitapur, India. These are some of their talking points found here:


* Since the Fukushima nuclear disaster countries such as Germany and China have put moratoriums on nuclear expansion, but India and South Africa announced plans to further develop their nuclear energy programmes. The most worrying of these is situated in a place called Jaitapur in India. Which if completed will be the world's largest nuclear power facility.

* Two of the world’s largest banks, HSBC and BNP Paribas, are part of a group of banks looking to invest in this project.

* The proposed reactors would be built on a high risk earthquake zone on the coast - leaving it vulnerable to earthquakes and potential Tsunamis and flooding.

* The project faces very strong local opposition, as it would have huge impacts on the local environment and economy, affecting more then 20.000 farmers and fisherman.

* By removing nuclear power from their investment portfolios, these two banks can be leaders in the clean, safe energy future. We need them to only invest in renewable and energy efficiency technologies.

* For those of you who are clients of the banks you can communicate that you do not want your savings to be used in financing dangerous nuclear projects like Jaitapur, you want your bank to support clean, safe and sustainable energy.

Germany, China, and Italy have laid to rest plans to build new nuclear plants. Toshiba has recently announced that they will turn the focus of their kaleidoscope away from nuclear energy and instead concentrate on renewables. However, Prime Minister Kan and Japanese bureaucrats ignore the tell-tale signs that nuclear power is morally, functionally, and ethically extinct, and instead continue to insist that nuclear power can be used safely in the future.

The funding currently being channeled into nuclear in Japan, can be shifted to renewables like photovoltaic and wind energy instead. This will allow Japan to realize its proposal to equip all new buildings with solar panels by 2030, even sooner. Plus, the loss of more lives and the destruction of livelihoods can be prevented.