This past Sunday, in a home that doubles as a café and event space overlooking the stunning vistas of the Hachioji Basin in western Tokyo, one might have thought they had traveled back in time.


Accompanied to the backdrop of a flashing multi-colored light show, artist and author Alicia Bay Laurel—whose 1970 best-seller “Living On the Earth” has inspired generations of hippies and permaculturists across the planet—strummed her acoustic guitar and told fascinating stories of her life as a traveling artist.

“Over and over again, I watched people come to Hawaii and heal their bodies and spirits simply by absorbing the energy from the sun and the ocean,” she said, speaking of Maui island, her home for some 25 years. Her stay there served as the inspiration for her second book, “Being of the Sun”—described by Amazon as a “cult classic among nature-worshippers to this day”. 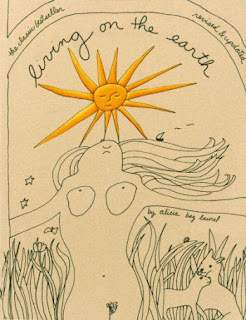 Laurel has earned a devoted following in Japan, where she has traveled nearly every year since 2006 to play music, sign individual copies of her books and CDs in her trademark flowing script, and collaborate with numerous artists, musicians and designers. She illustrated a book for bestselling author Banana Yoshimoto in 2010, and her works have helped raise funds for environmental nonprofit Artist Power Bank, as well as its sister project Kurkku, a complex of environmentally sustainable businesses. Her designs also helped raise funds for survivors following the 2011 disaster in Tohoku.

This past Sunday’s event, held at the aptly named Holistic Earth Café, indeed featured a distinctly Beatnik vibe. Guests were invited to try on and purchase hemp-based clothing, and the lineup of kitchen offerings even included fresh hemp pasta. “I could easily imagine myself in northern California in the 1960s, but here we are in present-day Tokyo,” Laurel commented. “The popularity of Living On the Earth never diminished in Japan, in large part because of the absolutely phenomenal community of people here who are committed to the ideas represented in the book.” 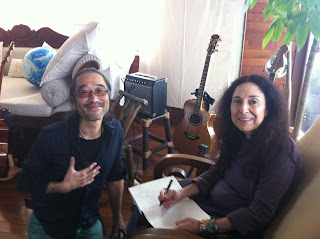 Event attendee, who told Laurel that he and his wife utilized the advice from her book to home-birth all three of their children

Laurel was joined by actress-turned-environmentalist Ikue Masudo (who was also a featured speaker at Harukaze 2010, a peace and sustainability event held in Tokyo). Masudo left the metropolitan capital several years ago to build an organic café and event space along the gorgeous shores of the Boso peninsula in Chiba prefecture, later going on to the island of Ishigaki in Okinawa, where she is now in the midst of creating a retreat and healing center. “My hope is that more and more people will become connected with the natural world, which will have positive repercussions for society on the whole,” she said, sharing her own personal story of becoming deeply inspired to change her life after filming television documentaries that featured swimming with dolphins in Hawaii and aboriginal communities in Australia. 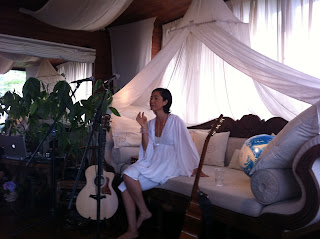 Sunday’s event, while unmistakably holding a vision for a better world, was most certainly not exclusively idealistic. Kathie Inoue, vocalist and ukulele player for the Hawaiian/reggae band Inoue Ohana, utilized the time in-between the band’s upbeat set to urge attendees to take action by adding their voices to citizen movements to end nuclear power and advocate alternative energies—including a recent worldwide petition urging Japan not to restart its nuclear reactors.

“There are many tools, including social networking sites like Facebook, that we can use to share information with each other and encourage positive social change,” she said, also echoing Laurel and Masuda with her message of simple living.

Alicia Bay Laurel and the full Inoue Ohana band play Yokohama Thumbs Up on June 21st, and Kunitachi Chikyuya on June 22nd. Laurel’s complete Japan tour schedule may be found on her website. In addition, this article provides a lovely introduction to her work and her long-standing connection with Japan.