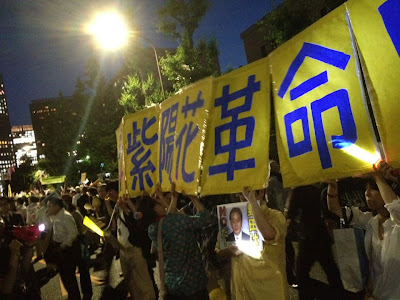 
Via Chie Matsumoto, a reporter with LaborNet Japan:

We did it!! Revolution Hydrangea in Japan, where people say there never is a revolution. We figured nearly 100,000 were there.

The Diet/PM's office area is the most restricted area for demonstrations, but we flooded onto the streets and started walking toward PM's office in hopes of getting our voices heard.

Very peaceful demo. Respect to all who are determined to raise their voices until their fight is won and keep all power plants shut.

Kimberly Hughes notes that Bloomberg has reported more than 100 million Japanese citizens are against the nuclear power.
Posted by TenThousandThings at 11:17 AM
Email ThisBlogThis!Share to TwitterShare to FacebookShare to Pinterest
Labels: citizen action, Hydrangea Revolution, Japan, Nuclear-Free, Tokyo

This morning's Tokyo Shimbun stated the crowd numbered at least 100,000. They say "a picture is worth a thousand words." If you look at one of the many aerial photos of last night's protest, it speaks hundreds of thousands of words. I think the PM heard them loud and clear, hopefully he will heed them.

Aerial photos were all over FB yesterday. Reminiscent of the massive 100,000+demonstrations that went on for days in Tokyo in 1960 protesting AMPO. Over a million Japanese citizens protested in the late 1950's through 1960.