Cornerstone of Peace & the "Okinawan Heart" 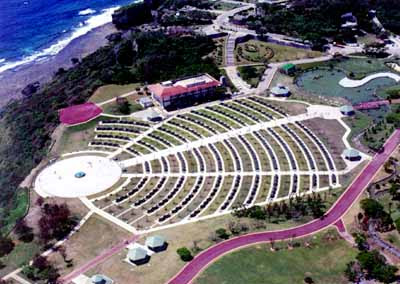 
After the battle's end, instead of bringing peace and democracy to Okinawa, the U.S. government positioned Okinawa as its military "Cornerstone of the Pacific."  Soldiers seized ancestral farmland and homes ("by bayonets and bulldozers") from war survivors to make way for US military bases on 20% of the island's land mass. After fifty years of enduring the US expropriation of their land for war (Korea, Vietnam, and Iraq)  training, Okinawans countered this unwelcome militarist moniker with their pacifist self-definition when they named a memorial erected on Mabuni Hill in Itoman the "Cornerstone of Peace" ( (平和の礎 Heiwa no Ishiji).

The massive monument was dedicated on June 23, 1995 to commemorate the 50th anniversary of the end of the Pacific War and the Battle of Okinawa. Its purpose: (1) Remember those lost in the war, and pray for peace; (2) Pass on the lessons of war; and (3) Serve as a place for meditation and learning. Mabuni Hill was the site of the Japanese military headquarters and scene of heavy fighting in late June 1945, towards the end of the Battle of Okinawa. The names of over two hundred and forty thousand people, including Imperial Japanese and American soldiers, as well as over 100,000 innocent Okinawan civilians, who lost their lives are inscribed on the memorial:

It conveys to the Japanese as well as people of the world, the "spirit of peace" which has developed through Okinawa's history and culture. The names of all those who lost their lives in the Battle of Okinawa- regardless of their nationality or whether they ware of military or civilian status- are inscribed on "The Cornerstone of Peace," serving as a prayer for eternal world peace.

In late March 1945, a fierce battle such as has rarely been seen in history took place on these islands. The "Typhoon of Steel" that lasted for ninety days disfigured mountains, destroyed much of the cultural legacy, and claimed the precious lives of upward of 200,000 people. The Battle of Okinawa was the only ground fighting fought on Japanese soil and was also the largest-scale campaign of the Asia-Pacific War. Even countless Okinawan civilians were fully mobilized.

A significant aspect of the Battle of Okinawa was the great loss of civilian life. At more than 100,000 civilian losses far outnumbered the military death toll. Some were blown apart by shells, some finding themselves in a hopeless situation were driven to suicide, some died of starvation, some succumbed to malaria, while other fell victim to the retreating Japanese troops. Under the most desperate and unimaginable circumstances, Okinawans directly experienced the absurdity of war and atrocities it inevitably brings about.

This war experience is at the very core of what is popularly called the "Okinawan Heart," a resilient yet strong attitude to life that Okinawan people developed as they struggled against the pressures of many years of U. S. military control.

The "Okinawan Heart" is a human response that respects personal dignity above all else, rejects any acts related to war, and truly cherishes culture, which is a supreme expression of humanity. In order that we may mourn for those who perished during the war, pass on to future generations the historic lessons of the Battle of Okinawa, convey our message to the peoples of the world and thereby established, displaying the whole range of the individual war experiences of the people in this prefecture, the Okinawa Prefectural Peace Memorial Museum.