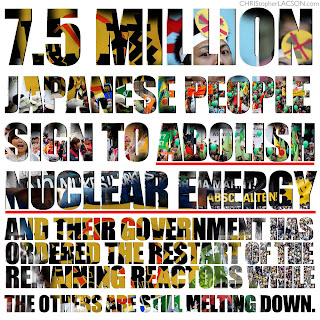 While the Japanese and local governments restart nuclear reactors throughout the country, Californians and Oregonians are joining hands with the 7.5 MILLION PLUS people in Japan demanding that Japan graduate from nuclear power.

Simultaneous Shut Down, Not Meltdown events will be taking place this weekend all along the west coast of the continental U.S. There actions are a part of an international solidarity movement led by a coalition of six groups Citizens’ Nuclear Information Center (CNIC), FoE Japan, Green Action, No Nukes Asia Forum, Peace Boat, and Shut Tomari .

Message from the organizers:


While we are taking this action at the Japanese Consulate on June 22, the US government and the Obama administration continue to tell the people of California and the United States that the two nuclear plants in California at San Onofre and Diablo Canyon are safe and that the taxpayers should continue to subsidize the nuclear industry. We reject these policies and views and the lesson of Fukushima is that there is NO Safe Nuclear Power whether in Japan or the the 104 nuclear plants in the United States.


We will gather at 3PM with signs. We'll deliver a letter to the Prime minister's representative and at 4:45 we will participate in a Die-in, where we'll reenact what it is like to suffer from deadly radiation exposure. Body painting will be available to make people look like we are bleeding from our orifices (symptom of radiation exposure).

Location: In front of Prime Minister's residence at the Kokaikishakai Building
Get off at Kokkai-gijoudoumae station- exit 3 (MAP)

Organized by the Metropolitan Coalition against Nukes