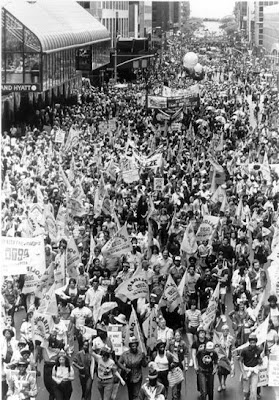 On June 12, 1982, in New York City, one million people demonstrated against nuclear weapons; and for an end to the Reagan administration's military build-up, arms race, and military violence in Latin America (El Salvador). This was the largest political demonstration in world history (until the Feb. 15, 2003 global march protesting the U.S.-UK "preemptive" war against Iraq).

Many thanks for the reminder of this anniversary to No More Fukushimas Peacewalk, organized by the engaged Buddhists of Nipponzan Myohoji, a group known for global witness for peace:

June 12th will be the 30th anniversary of the anti-nuclear rally that drew a million people to New York City. That event was a major touchstone for Nipponzan Myohoji-- 5 peace walks converged on NYC with their teacher, Venerable Nichidatsu Fuji (Guruji). Here is some great archival footage (in Japanese) of Nipponzan Myohoji & Guruji in NYC and then Bainbridge Island Seattle. 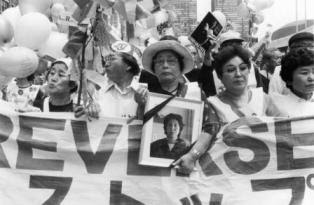