170,000 passionately take to Tokyo streets for Sayonara Nukes Rally: “We HAVE made change! Now, it’s time to take it to the next level." 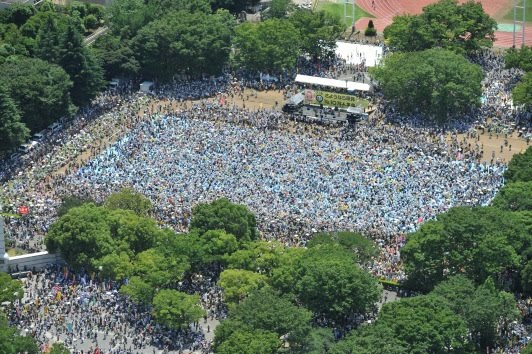 I have been fortunate enough to take part in many vibrant demonstrations calling for social change in such areas as peace, clean energy and other justice-related causes in various cities around the world for years. Here in Tokyo, Japan, where I have lived for the past decade, I have felt the demonstrations against nuclear power following last year’s Fukushima nuclear disaster growing steadily. Nothing, however, compares to the size and intensity of yesterday’s Sayonara Nukes Rally, held in and around the city’s Yoyogi Park.


Deciding to take advantage of the summer sun by biking to the event, I understood that this demonstration was going to be different as soon as I approached police officers stationed more than a kilometer outside the park, followed soon thereafter by endless throngs of people clamoring to enter the demonstration grounds from all sides. Although the scene was familiar—event-goers of all ages waving placards, playing instruments, and shouting out various messages—the sheer immensity of the scale was absolutely unlike anything I had ever before experienced. The event had been extremely well-organized, catering to the many different demographics of protesters by arranging different marching contingents for the three major categories of attendees that were expected to attend: leftist labor groups, Gensuikyo and other anti-nuclear organizations, and NGOs/grassroots groups together with individual citizens—the latter of which constituted the newest historical element to protest culture in Japan. There was something here for everyone, and the combined energy felt vibrant, palpable—unstoppable.

The journey to the park (and adventure trying to find a space for my bike) took quite a bit longer than I had anticipated, and I ended up missing the first part of the day’s program, including speeches from numerous figures including musician/activist Ryuichi Sakamoto, author/nun Setouchi Jakucho, and performing artist/human rights activist Kaori Kanda, whose work I had become familiar with at a 2010 event. No matter, however; the day was just beginning, and there was plenty more to take in.

After swimming my way through the crowds, I was finally able to join members of the Namida Project to set off on the demonstration route through the streets of Shibuya. Needing more hands for our banners, we befriended a woman along the way who said she had never before attended a demonstration, but was moved to do so when thinking about the future for her two year-old daughter—a typical story I had heard many times during other post-3.11 demonstrations. 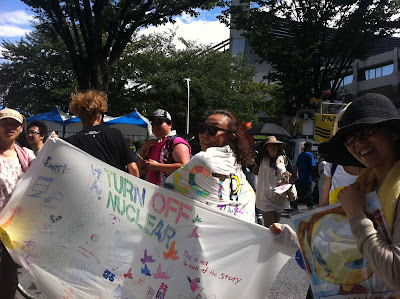 Marching with members of the Namida Project carrying a banner designed by Crystal Uchino,
author of the poignant essay, "Rise like Tsunamis after the Earthquakes"

Shortly thereafter, I had to turn back to meet up with a student of mine whom I had missed earlier in the park. The timing turned out to be perfect, since just as I returned to the event grounds, I heard wafting through the warm breeze the now-familiar guitar refrains from “Human Error”—the epic song from Kyoto-based band Frying Dutchman that had become the voice of the anti-nuclear movement following the 3.11 disaster. This was the song that had changed the views held by many of my previously pro-nuclear students, and I had been wanting badly to see it performed live. To do so here, surrounded by the powerful energy of the Sayonara Nukes rally, was beyond incredible. (Someone called my iPhone midway through, cutting off the filming. My apologies...)

I headed next to the other main stage, where another series of speakers were in the midst of delivering rousing speeches regarding the historical moment now taking place in Japan. I was pleased to see that Nobuto Hosaka—the mayor of Setagaya ward, where I just recently moved, and a staunch opponent of nuclear power—onstage discussing the Transition Setagaya movement (part of the global Transition Network), as well as Japan’s need for implementation of a “zero nuclear” policy. He was followed by Hiroko Uehara, former mayor of Kunitachi City, who minced no words in saying that the reason why the Ohi reactor was restarted boiled down to economics, pure and simple. “There is immense money to be made from nuclear power, and the nuclear mafia will not give up easily,” she said, “but the power is in our hands. If citizens raise their voices and pressure their local lawmakers to take up this issue at the national meeting of city mayors, we CAN make change!”

The need for political change was strongly echoed by Hajime Matsumoto, the owner of a recycled goods shop in Tokyo’s Koenji district, who successfully organized a large-scale anti-nuclear demonstration last April—mostly by word-of-mouth and social networking sites such as Twitter. “The attitude of this governmental administration following the Fukushima crisis has been beyond contemptible,” he alleged. “When citizens are demanding and pleading with regard to a specific issue—in this case the restart of the Ohi nuclear reactor—any respectable government would take some notice. Not these bastards, who just went right ahead and did what served them. Truly, it’s time for citizens to take back our country.” 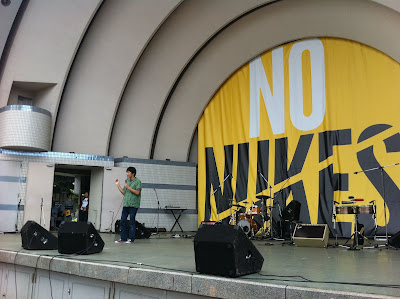 Taro Yamamoto, the actor who lost work over his vocal anti-nuclear stance following 3.11, took the stage next and voiced his deep emotion at viewing the crowds of attendees from the chartered helicopter flying above the crowd—an initiative spearheaded by author Takashi Hirose and funded by the Johnan Shinkin Bank, which had begun weeks earlier in order to ensure media coverage of the weekly demonstrations outside the Prime Minister’s residence. “Honestly speaking, I had been losing hope that we as individuals would be able to make change. But when I saw the endless sea of people extending out from the park in all directions, I realized I was wrong: We HAVE made change,” he said impassionedly. “Now, we must take this to the next level. Politicians must know that if they do not respond to the peoples’ wishes, their jobs are finished.”

“The world is watching to see Japan’s next moves regarding nuclear power, which will reveal whether or now we have learned from the pain of the Fukushima nuclear accident,” said Akira Kawasaki from the Peace Boat NGO, director of the Global Conference for a Nuclear Power-Free World held in Yokohama in January. “This is truly a pivotal moment in history.” 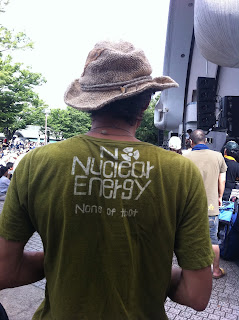 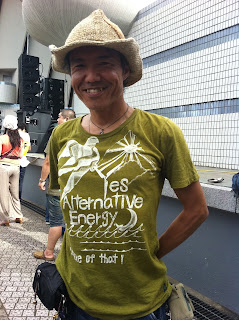 The New York Times has a good article on the demonstration, and this Daily Kos had a brilliant overview of the day’s events, including organizers’ rebuttal to the short-sighted argument that the disaster is owing to “Japanese culture”. Kanagawa-based blogger Ruthie Iida also has an interesting account of her experience during the demo at her beautiful photo site, Faces of Japan.

Powerful video showing Fukushima women engaging in a"die-in"
in front of the Prime Minister's residence on June 7, 2012 to protest the restart of the Ooi Nuclear Power Plant, after having submitted a protest to the office of Prime Minister Yoshihiko Noda. 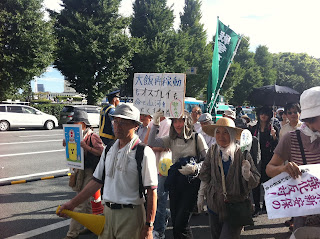 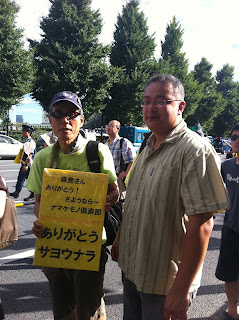 Top: "The Ohi Nuclear Power Plant and Osprey helicopters are destroying our lives and nature"
Bottom: Keibo Oiwa of the Sloth Club (left), whose sign reads "Nuclear power: Thank you and goodbye." 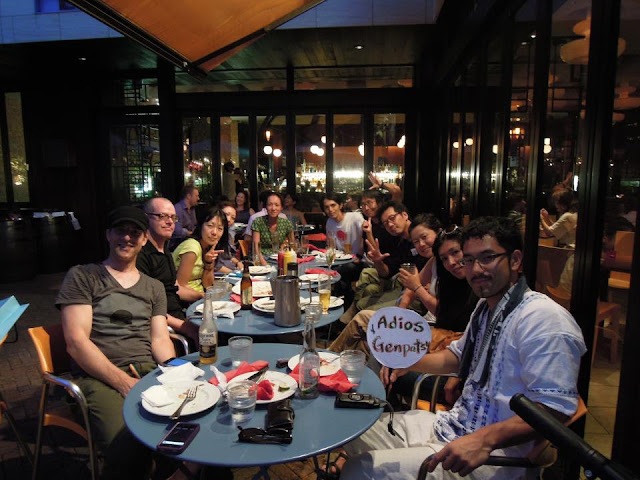 Above: Discussing the day's events together with a group of like-minded friends, including social and food justice activists, organic farmers, and filmmakers