Rose Welsch: "You know you're in the middle of a Japanese revolution when..." 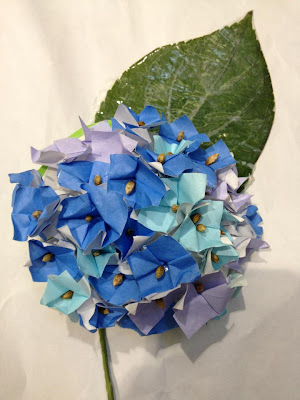 You know you're in the middle of a Japanese revolution when a "revolutionary" is an older woman who sweetly passes out very carefully handcrafted origami hydrangea flowers. Each petal has been neatly folded out of paper, tiny buds glued one by one into the middle of each flower, and a real hydrangea leaf has been laminated and cut.

Now, let's hope Japan's government will follow suit and very carefully and lovingly craft new energy policies instead of recklessly restarting its 54 nuclear reactors even though this is an EARTHQUAKE PRONE COUNTRY with reactors sitting on fault lines!!!!