This clip from Hitomi Kamanaka's Ashes to Honey gives voice to locals who have long opposed the destruction of Iwaishima island to make way for a nuclear plant in Japan's beautiful Inland Sea, and suggests alternative paths to a renewable energy future for Japan and the world. (NOTE: Swedish-born, Japan-based eco-blogger Martin Frid says that, in the Swedish deregulation booster spotlighted in the clip, who paints a rosy picture of Sweden's energy politics, is misleading: "Sweden has 12 nuclear reactors, 10 still up an running, and a new law that says new reactors can be built to replace the aging ones. So Sweden has not abandoned nuclear power - still some 30-40% of the nation's energy comes from nuclear, I'm ashamed to say. The referendum in 1980 was a sham with 3 different voting alternatives that made it possible for the people-in-power to keep the nuclear power plants up and running.)

The diverse candidates in the upcoming (July 29) Yamaguchi gubernatorial election reflect parallel disjunctures in Japan's political economic and cultural landscape. The outcome in the prefecture just south of Hiroshima prefecture could influence national energy policy (& whether Tokyo implements a US military plan to test V-22 Osprey throughout Okinawa & the mainland), according to Kyodo (via JT):

An advocate of renewable energy, two former bureaucrats and an ex-Diet member declared their candidacies Thursday for the July 29 Yamaguchi gubernatorial election.

The campaign is expected to focus on whether to approve a plan to construct Chugoku Electric Power Co.'s Kaminoseki nuclear plant, with political observers saying the outcome could affect national energy policy.

Since the 1980's, Chugoku Electric has wanted to build the nuclear plant on landfill at Nagashima Island in the seismically active Inland Sea, epicenter of the 1995 Kobe earthquake. Likewise, local residents, fisher people, environmentalists, and nuclear-free activists have fought the plant for three decades. The beautiful Inland Sea, revered for centuries in Japanese culture, and made famous abroad by Donald Ritchie's eponymous travelogue, is also known as Japan’s Galapagos because of its diverse species, including the black finless porpoise.

In 2010, the Kaminoseki struggle went global when a coalition of activists submitted a petition with 860,000 signatures to the Ministry of Economy, Trade and Industry. They announced this at a press conference that coincided with the UN Convention on Biological Diversity, held in Nagoya; and placed an ad in the Asian edition of the International Herald-Tribune. The ad presciently expressed concerns about earthquake damage that would result in nuclear plant damage and the release of radiation.

Hitomi Kamanaka's 2010 film, Ashes to Honey, explored the Kaminoseki struggle from the personal perspectives of local residents. Among them: the fisher people of Iwaishima (Iwai Island), most of whom oppose the construction of a nuclear plant just four miles from their ancestral community. Ashes to Honey is the last film in the filmmaker's trilogy of documentaries on nuclear issues including Hibakusha at the End of the World (about victims of nuclear radiation exposure from Japan to Iraq to the U.S) and Rokkasho-mura Rhapsody, about the decrepit nuclear reprocessing (plutonium) plant at the northeastern tip of Tohoku. Through making these films, Kamanaka has become an expert in nuclear issues and a prophetic voice.

The industry has long been releasing propaganda saying that nuclear power is safe, and now, following the accident, they have continued with the same lies by declaring that the radiation being released is also nothing to worry about. People prefer to believe the propaganda because it’s easier, but unless they face reality, they won’t be able to protect themselves.

Here in Japan, we have been led to believe that the matter of electricity simply involves flipping on a switch, and people do not think about where it comes from. My latest film takes up the issue of the radiation emitted from nuclear power plants on a regular basis—as well as during accidents like the one we are now experiencing—which is something that people here have not been educated about whatsoever.

Besides exploring the ongoing struggle over nuclear power in Kaminoseki, Ashes to Honey suggests an alternative path: the example of Sweden where citizens, by referendum, abandoned the dangerous technology in 1980. 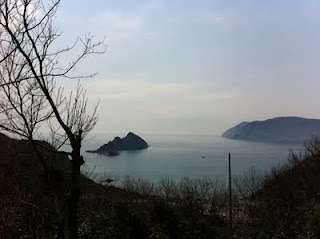 Watarida retired early from his nearly twenty-year career in the organic produce distribution industry in order to spend a year in the United States learning English and studying food security issues before returning to Hiroshima to become a full-time activist...

He told me that since the plant site was not in direct view of residents in the town of Kaminoseki, it was easier for the Chugoku Electric Power Company to buy them off and keep them quiet about nuclear power's potential dangers. “The fishermen’s cooperative from Kaminoseki sold their fishing rights around the plant site for hundreds of millions of yen, and the people have also gotten quite used to the cushy arrangement whereby the power company hands out huge subsidies for road repairs and other local projects,” he explained.

Watarida told me that the town of Kaminoseki and its environs are a “hotspot for biodiversity”, rich in seaweed and aquatic creatures such as the sunameri (finless black porpoise), and featuring one of the last pristine untouched spots in the entire Seto Inland Sea. “This was an extremely important area from around the 17th to the 19th centuries in terms of communication and transportation, so there is also enormous potential here in terms of tourism and history,” he explained. “We still have hopes that the local community here will wake up to these possibilities and stop being so dependent upon corporate handouts.”

The story was a completely different one, however, Watarida said, for those living on the nearby island of Iwaishima (mostly fishermen, and their wives), who literally find the proposed nuclear power plant site staring them directly in the face. He said that they had been loudly protesting the plant—which sits a mere four kilometers away from their island—since its inception some thirty years ago. Its fishing cooperative members staunchly refused to sell their rights to the electric power company, choosing instead to put up an impassioned fight to protect their natural way of life.

“Since the islanders of Iwaishima do not have many employment opportunities other than fishing due to being separated from the mainland, many men have gone on assignments to work in nuclear power plants in Shikoku or other parts of Japan,” Watarida explained. “They know the dirty truth of the industry firsthand, and in fact, a majority of these men have already died from cancer.”

Read more about Kim's journey to the Iwaishima and meetings with other locals (notably Yoshito Kanaka: “If this plant is built and something goes wrong, the entire Seto Inland Sea will be completely destroyed") here.

Caroline Fraser details the Kaminoseki struggle within the context of Japan's national nuclear-free movement and 3/11 "Japan’s Once-Powerful Nuclear Industry is Under Siege: The disaster at the Fukushima-Daiichi nuclear power plant has highlighted the importance of nuclear energy to Japan and the power long wielded by the nuclear sector. But that influence now is sure to wane, to the relief of opponents who have fought for years to check nuclear's rapid growth," published at Yale Environment 360 on March 17, 2011. 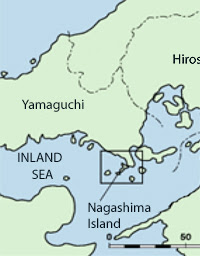