Green Action Japan: Why we should be worried about the Oi Nuclear Plant Restart 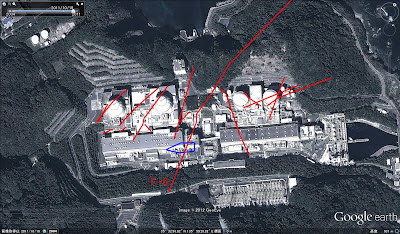 Aileen Mioko Smith of Green Action Japan (via Deep Kyoto) tells us why we should be worried:

Distance from the Ohi reactors to central Kyoto city: 60 kilometers

The following message is from Aileen Mioko Smith of Green Action Japan:

The red lines on this photo depict the shattered zones (earthquake faults) under the Ohi Nuclear Power Plant. The information is from Kansai Electric is laid over the Google Earth by Professor Mitsuhisa Watanabe, tectonic geomorphologist, Toyo University (Tokyo, Japan.)

The F-6 fault which is suspected of being an active fault is marked. The boat-shaped blue shows the location of the original trench excavation.

Professor Watanabe inspected the Ohi Nuclear Power Plant site yesterday (June 27, 2012) with 5 members of the Japanese Diet. He confirmed 3 locations where the F-6 fault which is suspected of being an active fault can be examined by excavation. According to Professor Watanabe, the process to confirm whether this fault is active or not can be undertaken within a one week period (this includes the time required for refilling the excavation).

Government regulations state that category “S” equipment which require rigorous seismic resistance standards are “not assumed to be built over active faults.” Yesterday, it was confirmed during the on-site examination that the pipes for the emergency coolant intake from the ocean are “S” category, and they cross over the F-6 fault.

The Fukui prefecture newspapers report on the above issue today. Below, see Kansai Electric’s original sketch of the Northwest Wall of the trench. The sketch depicts a classic active fault. This controversial sketch was not submitted by Kansai Electric during the recent government back-check of Ohi.

Yuichi Sugiyama, a prominent member of the government’s back-check committee, in an interview with Kyodo (article 26 June) stated, “It is necessary to make an onsite examination of the shattered faults once more. We have only seen part of the past inspection records. We need to examine all of the information.”