Piers Williamson: "One cannot help but feel that we are witnessing a battle for the soul of Japan."

In "Largest Demonstrations in Half a Century Protest the Restart of Japanese Nuclear Power Plants," published at The Asia-Pacific Journal, Piers Williamson analyzes the response of Japanese citizenry to the of restart nuclear energy plants, highlighting the chasm between popular will and PM Noda's decision: 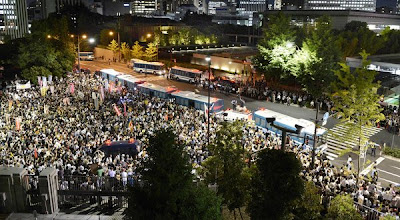 On 29 June, Japan witnessed its largest public protest since the 1960s [when millions of Japanese of all walks of life protested the US-Japan Security Treaty (ANPO) which allowed the US to maintain military bases in Okinawa and Japan].

This was the latest in a series of Friday night gatherings outside Prime Minister Noda Yoshihiko’s official residence. Well over one hundred thousand people came together to vent their anger at his 16 June decision to order a restart of Units 3 and 4 at the Oi nuclear plant . This article discusses the events of the last several weeks which sparked this massive turnout as well as the nature of the protest. It begins by outlining the Japanese government’s recent policies affirming nuclear power, from Noda’s nationwide address of 8 June justifying the Oi restarts on the grounds of ‘protecting livelihoods’, and continuing with the move on 20 June to revise the Atomic Energy Basic Law and establish a law to set up a new, yet potentially toothless, nuclear regulatory agency.

Moreover, on 7 June, the day before Noda made his address, he was visited by a citizen’s group headed by Nobel laureate Oe Kenzaburo, which presented him with a petition calling for an end to nuclear power. The petition had been signed by 7.5 million people. A week later on 14 June, another citizen’s group, which had gathered 320,000 signatures in a call for a referendum on nuclear power, met with the Tokyo metropolitan assembly’s general affairs committee. However, as in Osaka in March, they were rebuffed in a vote at the Tokyo assembly on 20 June.

In addition to petitions, concerned citizens have been taking to the streets. Formed on 22 October 2011, the Metropolitan Coalition Against Nukes (MCAN) has been using the internet to organize demonstrations against nuclear power. The use of the internet, and Twitter in particular, preserves a loosely woven network, and MCAN asks participants not to use banners or flags bearing political messages unrelated to the nuclear issue.

MCAN’s first demonstration was held in Yokohama on 14 January 2012. On the one year anniversary of the 11 March disaster, around 14,000 activists encircled the Diet building in a candlelit vigil. Since 29 March, MCAN has been holding weekly protests outside the Prime Minister’s official residence. MCAN says that participation has steadily ballooned from 300 protestors at the first event to around 45,000 people on 22 June. Other reports of 22 June vary from 10,000 to 20,000. Representative figures included Oe Kenzaburo, the composer Sakamoto Ryuichi, the actor Yamamoto Taro, the rock musician Goto Masafumi, and the writers Ochiai Keiko, Kamata Satoshi, and Hirose Takashi...

Despite the size of the gathering on 22 June, bloggers complained that the event received scant media coverage. One wrote that NHK’s 9 p.m. flagship news show completely ignored it. TV Asahi’s 10 p.m. show merely mentioned the number of demonstrators and then tried to ask Trade and Industry Minister Edano Yukio, and Nuclear Policy Minister, Hosono Goshi, what they thought as they were leaving the PM’s official residence. A reader of the Japan Times wrote a letter to the editor commenting on the general lack of coverage in comparison to the frenzied reporting of the capture of Takahashi Katsuya, the 1995 Sarin gas attack suspect.

Anti-nuclear actions taken by shareholders at TEPCO and KEPCO received more coverage later in the week, as nine out of ten of Japan’s power companies rejected proposals to abandon nuclear power at shareholder meetings on 27 June. When Osaka governor Hashimoto Toru asked KEPCO about reprocessing and whether it had a business plan to survive without nuclear power, KEPCO board members responded that reprocessing was critical and that abandoning nuclear power would cause an astronomical increase in costs. The KEPCO vice president also asserted that a mix of all energy sources, including nuclear, was the best option for the future.39 For its part, TEPCO rejected proposals made by the Tokyo metropolitan vice-governor, Inose Naoki, for transparency in decision-making on price hikes...

One noticeable feature of the [June 29, 2012] demonstration was the age range, from small children to the elderly. I spoke to a forty-year-old housewife who was carrying her four-year-old daughter. Following the accident at Fukushima, she had evacuated with her daughter to Niigata Prefecture from Chiba Prefecture. Her husband had to stay on in Chiba. "For the sake of the children, I want them to get rid of nuclear reactors…They keep saying ‘the economy’, ‘the economy’, but life is more important. We have an economy because of life. They need to return to the start and think again…When I think about what we as adults have to do it is clear that we have to protect the children’s futures [author's translation]..."

Popular demand for change continues to grow. The move to restart reactors comes despite the fact that the precise causes of the catastrophe at the Fukushima Daiichi nuclear plant remain obscure, vast tracts of land and sea and a significant portion of the food supply remain contaminated, 160,000 people remain internally displaced, no known technology can handle the melt-throughs, and there is no solution for nuclear waste disposal. The state’s aggressive move to restart Oi contrasts with its tardy response to the accident and its aftereffects, and to its lack of concern about the risk of a further disaster at Unit 4 should it be hit by a large aftershock or a quake caused by a reactivated fault line underneath the plant. And it comes in the wake of overwhelming expression of anti-nuclear power sentiment. Pronouncements of a commitment to protect the public now ring very hollow indeed. Iida Tetsunari, director of the Institute for Sustainable Energy Policies, and anti-nuclear candidate for the governor of Yamaguchi Prefecture, commented that ‘There is anger and a loss of confidence in the government. This is an irreversible change, and I expect this type of movement to continue.’

Whether or not the anti-nuclear movement will be successful remains to be seen. Power elites do not give in easily and we can expect them to fight tooth and nail for every scrap of privilege that they can lay their hands on. However, one cannot help but feel that we are witnessing a battle for the soul of Japan."