Many thanks to Rose Welsch of Peace Boat, Global Article 9 Campaign and US for Okinawa for sharing these great photos from the 7.16.12 "Sayonara Nukes" rally in Tokyo and for cutting through to the crux of the issue: people in Japan and everywhere want to live democratically, by government "of the people, for the people, and by the people." In Japan and other nuclear nations, this means living without the threat of being nuked by their own nations' nuclear plants. 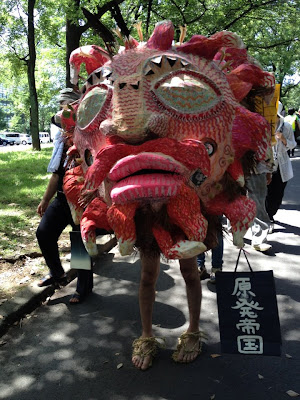 170,000 people gathered at the event,
including this character, who depicted an "Imperial Nuclear Japan." 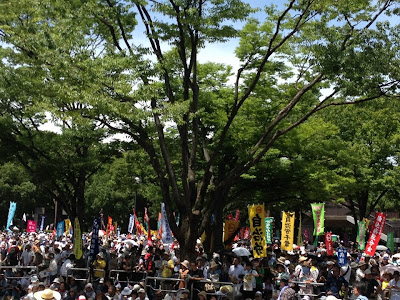 Famous Japanese musician SUGIZO joined the event today
and gave a fantastic speech about the need to reclaim Japan
from those steering it down a dangerous course. 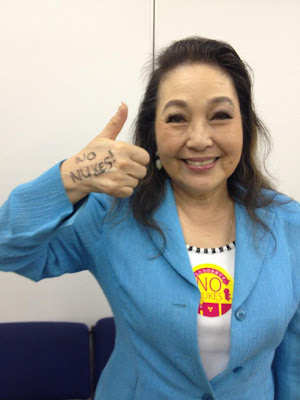 Yukawa Reiko, a famous songwriter and music specialist in Japan, joined today's event.
Upcoming and mid-level artists are often silenced in Japan
if they take a stand against nuclear energy,but people like Yukawa are undeterred. 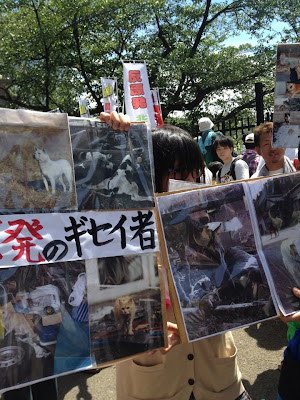 These young people held up photographs of the domesticated animals
such as cows, dogs, cats that were left behind in the Fukushima evacuation zone
and have starved to death or are on their last legs. Their sign asks us to remember all the creatures besides humans who have been victimized by nuclear energy. 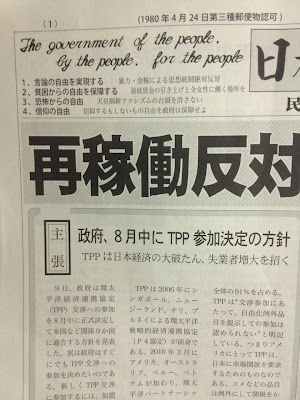 "The Government of the people, by the people, for the people."
This quote in English included in a Japanese newspaper article about widespread opposition
to the restart of Japan's 54 nuclear reactors caught my eye today.
From Japan to the US, from Canada to Egypt, isn't this basically what people are calling for?