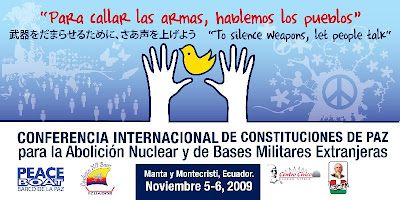 From the Peace Boat and the Global Article 9 Campaign to Abolish War:


On November 5-6, Peace Boat and the Global Article 9 Campaign to Abolish War is jointly organizing the International Peace Constitutions Conference for Nuclear and Foreign Military Base Abolition. It will take place in the city of Montecristi, the emblematic place where Ecuador adopted a new peace constitution in 2008, and in Manta, site of a US military base that is currently being dismantled and removed under the the new constitution's prohibition of foreign military bases and installations on its territory.

The conference will focus on the concrete functions and outcomes of peace constitutions, especially in the areas of nuclear abolition and foreign military base abolition. In particular, Article 9 of Japan's Constitution and Article 416 of Ecuador's Constitution will be analyzed and discussed. Just as Japan's Article 9 renounces war as a method of settling international conflicts and the maintenance of armed forces, Ecuador's Article 416 also promotes the peaceful solution of conflicts and rejects the use or threat of use of force. In addition, it promotes universal disarmament, and condemns the use of weapons of massive destruction, as well as the imposition of foreign military bases.

The conference will also include sessions on peace constitutions, the abolition of nuclear and foreign military bases, and testimonies from ten Hibakusha (survivors of the nuclear bombings of Hiroshima and Nagasaki who are participating in Peace Boat's 67th Global Voyage Hibakusha Project). There will be exhibitions, cultural events, and a peace festival held, too. The conference is open to the public and is expected to draw hundreds of local citizens, activists, and officials!

To request more information about the conference, please write to: barcodelapaz.ecuador@gmail.com.