The latter festival played for its fifth year in Tokyo from October 3-9 before moving on to Osaka for its debut run. The official event website explains the ethos of the festival:

Following last year’s celebration of a century of Japanese Immigration to Brazil, this year we will celebrate 80 years of Japanese immigration to the Amazon state. For this occasion the festival will be showcasing films featuring Amazonas and related themes from Japanese directors.

The aim of Festival Cinema Brasil is to create an air of free cultural exchange and to reach audiences all over Japan, introducing them to the rich culture and history of Brazil and its people. In the hope of strengthening Brazil’s image abroad, the festival will showcase works from Brazilian filmmakers encouraging people in Japan to learn more about Brazil. This would lead to more opportunities for the Brazilian film industry, giving them the chance to break into the commercial Japanese DVD and film market.

Indeed, the Festival Cinema Brasil's trilingual website itself serves as an excellent guide to various aspects of Brazilian culture, offering resources such as a basic Portuguese language guide, map of Brazilian shops in Tokyo and Osaka, introduction to Brazilian music, and more here.

Films screened at the festival from Japanese directors included Eu Sou Feliz (I Am Happy) from Soraya Umewaka, and Pertificando from Akiko Nagura. Umewaka’s documentary portrayed the lives of people in a favela (slum) in Rio de Janeiro, seeking to illustrate how they perceived the concept of happiness. The daughter of a Lebanese mother and a Japanese father from a family of Noh theater performers, Umewaka (also a Noh artist herself) has traveled the world documenting the lives of street children in order to open viewers’ eyes to social inequalities. The Japan Times has an excellent piece focusing on her work here.

Nagura’s Pertificando featured collaborations between Japanese and Brazilian musicians who expressed their views on various social issues—such as rising unemployment amongst Braziians in Japan—through the voice of music. The director made an appearance at the festival to give a short introduction to her film, which was then followed by a mini live concert held at the Tokyo venue of the Tsutaya Theater in Shibuya featuring performer Koji Abe (a seven-string guitarist) who appeared in the documentary.

The festival lineup also included O Signo da Cidade (The Sign of the City), a film set against the backdrop of Brazil’s largest metropolis of Sao Paulo while featuring gorgeous music and cinematography. Screenwriter Bruna Lombardi, who also appears as the film's lead actress, has crafted a story of various characters' intertwining destinies that is both heartwarming and deeply spiritual. The film’s website includes interviews with Lombardi and her husband, the film’s director Carlos Alberto Riccelli, as well as music from the soundtrack. Also featured at the festival was O Misterio do Samba (The Mystery of Samba), where famous Brazilian singer Marisa Monte conducted research into samba’s history. Special talk sessions were also held with several samba experts in conjunction with the festival, giving additional insight into the legendary musical genre. 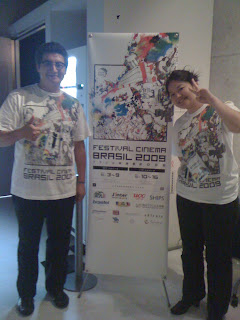 One of the festival’s more politically-oriented works was Zuzu Angel, a true story portraying the life of the Brazilian fashion designer of the same name, who dedicated her life to seeking justice for the arrest and murder of her son Stuart during the 1970’s by the Brazilian military dictatorship. Following the screening, I chatted with festival director Edison Mineki about cultural expression in Brazil in the context of the country’s turbulent political history.

Kimberly Hughes: What a powerful film. Of course, it was quite disturbing to see graphic scenes of the torture used against activists during this time period. But it’s also important to know that this history existed.

Edison Mineki: Exactly. This was a very difficult time in our country’s history. I was a youngster still living in Brazil then, and the repression was everywhere. We were actually more afraid of police than we were of common street criminals, and any criticism of the dictatorship had to be made indirectly. Artists found a way to protest, however, through means such as the satirical political journal O Pasquim.

Gradually, workers, intellectuals and artists began coming together more openly to demand change, at times fronted by famous performers such as Gilberto Gil and Caetano Veloso. In 1983 and 1984, the movement known as Diretas Ja! (Rights Already!) emerged in demand for free presidential elections. I attended one of these gatherings, held at a bridge in Sao Paulo, where around two million people joined together to call for change. It was absolutely exhilarating to be a part of this history.

KH: And there was an impact on film during this period as well, I assume?

EM: Yes. Film censorship was heavy during the military dictatorship, and even after its collapse in the mid-1980’s, people were often still afraid to speak out. This was compounded by the economic collapse that occurred after the election of President Collor in the late 1980’s, when film production basically stopped. Finally, with President Franco in office in the mid 1990’s, people began feeling safe to speak their minds, and films made a comeback. It was a cinema renaissance, of sorts.

KH: Could you explain a bit about the history of the Festival Cinema Brasil in Japan?

EM: I’ve always loved watching movies, ever since I was a kid. After I came to Japan in the mid-1990’s, around the time when the film industry in Brazil was rebuilding itself, I started thinking about ways to bring them to Japan. A big inspiration for this was watching the film O Quatrilho, a story about the lives of some Italian immigrants in Brazil. I tossed the idea around of starting a Brazilian film festival here with some friends in the media industry, and in 2004 the Brastel Telecom company agreed to become a sponsor. The festival started running officially in 2005, and has been growing ever since.

Edison Mineki is also the Executive Producer of Tupiniqum Entertainment Co., Ltd., described on the film festival website as an "event production company-aiming to promote cultural exchange between Brazil and Japan" and "introducing Brazilian culture through music and cinema to the Japanese community."