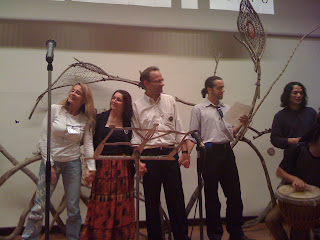 Her work started along the seacoast of Okinawa’s Ishigaki island, when villagers began a struggle against plans to build an airport along a fragile coral reef.

“These were people whose life rhythms were firmly rooted together with the ocean, and in the cycles of nature—tending to their fields by day, and enjoying their food and drink at night. They were furious at the thought of airplanes roaring overhead and destroying their tranquility. At one point, they even protested by dancing in front of the local police office!” Yamada recounted, explaining that their struggle was more cultural than rooted in any sort of ideology.

Yamada, whose life work springs from the intersection of peace and environmental issues, also made clear her concern about nuclear power in Japan.

"The truth is that nuclear power was first produced for the purpose of creating nuclear weapons—the same ones that destroyed Hiroshima and Nagasaki—and there is nothing to say that nuclear power plants in Japan won’t be utilized for this purpose in the future,” she said. “We must also understand the incredible danger posed by the high levels of radiation that these plants spew out on a continual basis, due in part to which we are practically swimming in a sea of chemicals.” 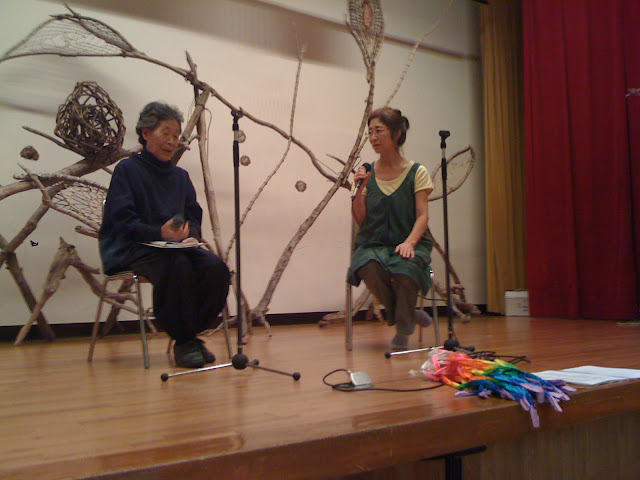 Yamada also voiced a concern about the trustworthiness of corporate media.

“I don’t read the newspapers or watch television, but I trust my knowledge of events more than people who rely on such sources, simply because I make it a point to go out and see for myself what is happening,” the activist emphasized.

She has traveled extensively within Japan, where she worked with people, including the victims of the 1995 Kobe earthquake, and the homeless. Her international activism includes work with Iraqis in Jordan; Palestinians in Gaza; North Koreans fleeing repression and starvation over the border into China; and—perhaps her most dedicated project—working for social justice in the Philippines.

“I offer you my deepest thanks for coming here to Japan to be with us,” she said, addressing the assembled World Marchers. “It’s going to be everyone here tonight––including the young people of Japan––who create a more positive future.”

World Marcher Isabelle Alexandrine Bourgeois echoed Yamada's view on the mainstream media. The Swiss journalist said her frustratration with the mass media focus on depressing events motivated her to start her own news source, the French language website Planet Positive. This website spotlights inspirational news from around the globe.

“I believe that when left to its natural state, the relationship between human beings is one of love and understanding, and not the negativity and fear that are perpetuated by media and governments.", Bourgeois explained. “Indeed, while maintaining this resource, I have continued to discover nothing but beauty and positivity.”

Featured performer Shinji Harada shared an equally uplifting message. The rocker just returned from New York City, where he performed for Universal Peace Day and a September 11th floating lantern ceremony organized by the New York Buddhist Church.
Born in Hiroshima, Harada gained musical fame while a still teenager. Only seconds after taking the stage, his infectious positive vibe pulled audience members halfway out of their seats to dance, clap and groove . 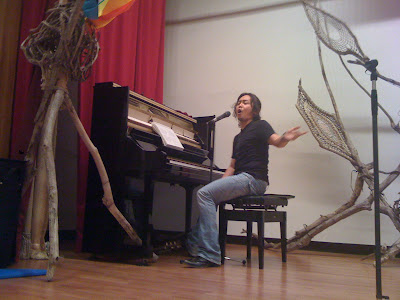 His urgent message between songs: “Given the state of the world today, it is extremely important that we take action--and that we do it now, since even five years from now it may be too late. Even so, what we have going for us is that our humanity is shared...and everyone single one of us has an important role to play.”

Harada shares of his thoughts on peace at his website's English page here, as well as at the site of his NPO Chinju-no-Mori ("Gentle Earth"), which organizes concerts at forested shrines to raise awareness of environmental and peace issues.

Many of the 50-some people who attended also browsed through photojournalist Hirokawa Ryuichi's exhibition and other peace booths.

This was a decent turnout considering that the event competed with a “Naked Loft” café (event and music space in Tokyo’s neighborhood of Shinjuku) featuring Yumi Kikuchi. The well-known activist held a talk and live performance session with Himalayan-born performer Bobin and author, musician, and eco-spiritual activist Alicia Bay Laurel. Laurel, who has longstanding connections with Japan, is here on tour--look out for more on her work! 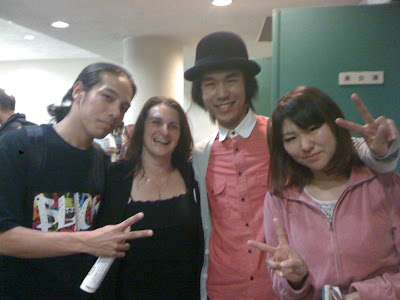 World marcher participant from New Zealand, together with Japanese university students in attendance at the event