Save Life Society: Okinawan Elders Speak Out about Henoko 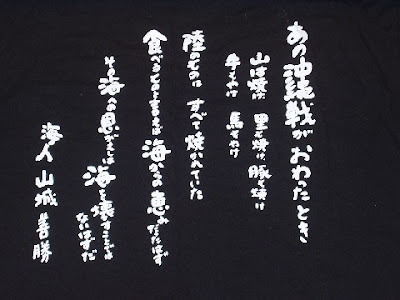 When the Okinawa War was ended in 1945,
mountains as well as villages were burned
and pigs, cows and horses were burned.
Everything on the land
was completely burned out.
Anything which we could eat was
a blessed gift from the sea.
Repay Mother Nature for her favor.
Do not to destroy the sea. 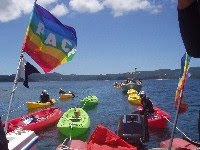 We hope all elders of the Save Life Society––for protection of all lives and livelihoods, Henoko, Okinawa, Japan are genki. Here's part of the message they voiced when Japan and the US started the Henoko military base project:


"Save Life Society"was formed by the elders mostly in their 80's and 90's to prevent construction of the monstrous air base, which will be offered to the U.S. Marine Corps based on Japan U.S. Peace Treaty, in the coral reef of Henoko, Nago, Okinawa, Japan. The air base has allegedly been planned by the Japanese and US governments. We, therefore, set up a sit-in camp in front of the fishing port of Henoko in 1996 in order to be prepared for any future development of the controversial project.

On April 19, 2004, Naha Defense Facilities Administration Bureau tried to start a drilling survey of the construction site prior to the environmental assessment as required by the Japanese law. Nevertheless, 52.85% of the citizens of Nago said "no" to the plan in the referendum conducted in Dec. 1997. The survey itself is said to possibly threaten the lives of the endangered spices, particularly, Dugong as the intended construction site is the largest sea-grass bed in Okinawa where Dugong find sea grasses that they feed on.

At this present moment, Henoko is very alert as the government agency is looking for any chance to build or place platforms to start drilling as they have been prevented to proceed with the work since September 9th last year. Every day, we feel tomorrow would be a crucial moment. Thanks to Ojih and Obah (honorary terms for elders in Okinawa) who struggled for years, during which 6 elders passed away without seeing result of their resistance, from the prejudiced selection of the site for the air base, the activities to stop the construction of air base still continues involving far greater number of people who love peace and nature from all over Japan and many of them are even from abroad. In that effort, we have not allowed the government agency to drive even a single pile into the bottom of the sea at all. But the officers still say they would proceed with the plan unless the government decides otherwise...

Since we have started sit-in, 6 members passed away without seeing result of the resistance. For those who left their hopes behind, I am ready to die to stop the construction," says Kinjyo Yuji (deceased in 2007), the representative. "I have been living with this sea for over 90 years. When the War (the battle of Okinawa) was over, there was nothing left to eat except the gifts of this sea. Thanks to this rich sea, I could feed and take care of my children. If you insist on building the base, kill me before you do so," says Shimabukuro Yoshi 92, the oldest member of the group.

We cannot live with a military base. Although we feel pains in our backs or legs, we will keep fighting for the future when we don't see any bases or any other causes of wars. We would like to restore peace as that is our concrete objective and determination. Whatever the difficulty is to occur, we would stop the construction of the base through our definite policy of non-violent and disobedience resistance. Thus please help us and gather your voice to the US government and the Congress to stop the construction of the base in Japan...