Join the Kyoto Anti-war Movement in their appeal for an end to all wars on Sunday, October 18th, 2009 at Maruyama Park (円山公園) in Kyoto, starting at 13:30. 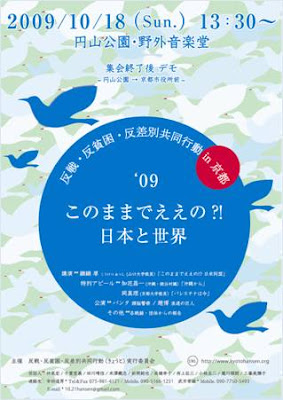 The event will feature live performances • a speech by Kyoto University's Oka Mari on the current sitation in Palestine • a speech about the alliance between the Japan and the U.S. presented by Kouketsu Atsushi from Yamaguchi University • and a special appeal to remove the military bases in Okinawa––led by Chibana Shouichi, a small supermarket owner from Okinawa who was taken to court by the Japanese government for buring the national flag in protest against U.S. military bases. 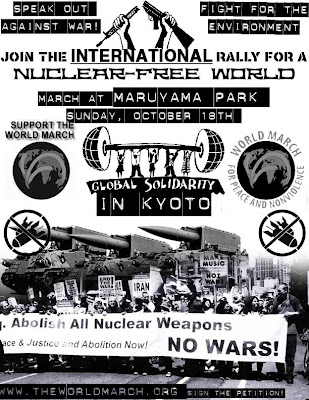 Arriving from Hiroshima, the World March for Peace and Nonviolence will make their appeal for peace at the event at 16:00. They will march on to Tokyo on the 19th.
Posted by TenThousandThings at 9:51 PM
Email ThisBlogThis!Share to TwitterShare to FacebookShare to Pinterest
Labels: citizen action, Hiroshima, interconnections, Japan, Kyoto, life-sustaining civilization, Nuclear-Free, Okinawa, peace, peace networks, Tokyo