In "Okinawa's Turbulent 400 Years," published at Japan Focus in January of this year, engaged scholar Gavan McCormack, author of Client State: Japan in America's Embrace,writes about the value conflicts underpinning citizen resistance to US militarism in Okinawa. He interweaves his analysis with background on the US military occupation of Okinawa and insights on related short-sighted, short-term, destructive capitalistic growth processes that threaten not only the well-being of Okinawans, but also the survival of everyone on our planet.

McCormack says the reason for Okinawans' passionate resistance of US militarism (and Japanese militarism before that) stems from the culture's pacifism rooted in a life-affirmative ethos:


Throughout Okinawa’s 400 years, two sets of contradiction have persisted: between Okinawan deep-seated peace orientation and the imposed priority to war and subjection by force, and between Okinawa’s multicultural and open, Asia-Pacific universalism on the one hand and “mainland” Japan’s dominant identity construct, defined by rejection of Asia and assertion of superiority, in forms often constructed around the emperor as divine, on the other.

According to one story, probably apocryphal, as King Sho Nei in 1609 chose non-resistance to the superior force of Satsuma, he uttered the words Nuchi du takara. Whether or not he ever spoke them, these words have come to be understood as a statement of Okinawan value. Sho Nei’s submission did not mean surrender. Facing physically superior opponents, submission was unavoidable, but conscience and value were not to be appropriated by force.

In two particular respects, this essay explores the contradiction between Nuchi du takara, the affirmation of the supremacy or sanctity of life, as the expression of Okinawan values and the competing principles imposed from outside: the priority to force (in the extreme form war, and therefore death over life) on the one hand, and the priority to growth, expansion, conquest, extended under fundamentalist capitalism to involve the appropriation and exploitation of nature itself over stability and conservation, on the other.

The US bases on Okinawa only contribute to 5% of the prefecture's economy.  They're not needed, and, in fact, impede the development of tourism and other industries.  Moreover, The US and Japan have repeatedly told Okinawans that the next new agreement means the end of bases. But after a string of broken promises, Okinawans now see through the US tactic of "bait and switch." In 1972, the US and Japan promised the "reversion" of Okinawa to quiet protests. This resulted in no change. And the latest, moving Futenma to Camp Schwab doesn't do away with pollution, noise, and assaults in Okinawa, it just moves them to another part of the island that has been relatively untouched since the US began their occupation:


Okinawans had imagined that “reversion” would bring them under the constitution, release them from the parameters of force and restore something of their ancient ideal of demilitarized, peaceful islands. It was not to be. The Okinawan people would never have chosen a permanent military identity, so the political challenge facing the Japanese state has been to neutralize the opposition to militarization and to secure the compliance of the Okinawan people to an agenda whose core is priority to the US alliance over the constitution, to military over civil or democratic principle, and to the interests of the Japanese state over those of the Okinawan people. Reversion, therefore, had to be built on deception and trumpery, bribery and lies. The post-reversion state used smoke and mirrors to try to create a theatre capable of deceiving and persuading on a mass scale.

The deceptions were thinly concealed. What was called “reversion” was actually purchase, at a cost greater even than Japan had paid a few years earlier to compensate South Korea for four decades of colonialism; “return” was also “non-return” since the bases remained (and Japan would pay the US to continue occupying them) and those who attempted to expose the truth of the deal were pursued mercilessly and their truths denounced as lies (continuing to this day, despite the emergence of proof of their truth from the US archives). When mass discontent against the bases threatened to boil over, a new round of “reversion” was promised, but again deception was the keynote: “reversion” actually meant substitution, modernization, expansion; the scale of the new works was concealed by calling them a “heliport,” and the expression “seiri shukusho” (base reduction) was chosen to try to convey the impression that overall that was what was happening.

Since Nago was the centre of opposition and the popular struggle centred there was able to block and frustrate the state design for a full decade, 1996 to 2005, money was poured into it to try to divide, weaken and corrupt it. Nobody, even the Governor, could openly state a preference for construction of a new base for the US over preservation of Oura Bay, with its newly discovered blue coral and its dugong colony, or the adjacent Yambaru forest and its creatures, so the Governor adopted the tortuous logic of arguing that the planned Cape Henoko structure would not really be a “new” base because it would in part be constructed on the site of an existing one. 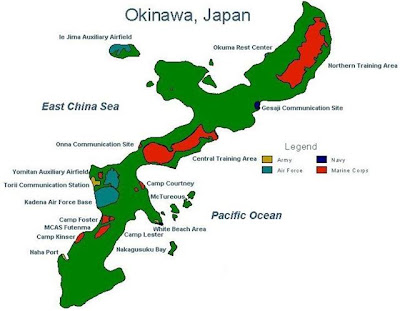 US military bases in Okinawa (click on it for a larger version.( Image: Japan Focus)

McCormack charges that "Chicago-style" neoliberalism as the ultimate cause for Okinawa's continuous occupation for over 400 years:


Capitalism in 1609 was in its very early, mercantilist stage, but that same ruthless drive, expansionism, and search for profit that drove the European exploration, conquest, and colonial expansion has continued to morph through different phases, eventually becoming the dog-eat-dog neo-liberalism whose bankruptcy has become so plain today. The Edo state tried in vain to resist it and to preserve intact its own social and economic order. With the modern, Meiji state, Japan launched full pelt into its own version of expansion at all costs, first colonial, then post colonial...

In its most untrammelled, pure, market and profit-driven mode, “Chicago”-style capitalism has brought the world economy to the brink of collapse. Even more importantly, it has stretched the fabric of the earth to breaking point, putting at risk our survival as a species. The earth warms, the polar ice caps melt, the glaciers and the coral reefs shrink, the seas rise, the deserts advance, the polar bear, the tiger (and countless other species of land, sea, and sky) are endangered. Our present trajectory offers the prospect of gradual decline into chaos, punctuated by water wars, oil wars, food wars, and epidemics.