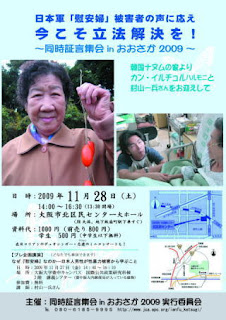 The Shogen Shukai (The Testimony Assocication) and the Kyoto division of the All-Japan organization to find a Proper Settlement for the Former Military Comfort Women invite "comfort women" from Asia to share their experiences with the people of Kansai every year. This year's guest will be survivor Ms. Kan Iltchul from Korea, who will bravely share her horrifying experience being coerced into becoming a war time "comfort woman" (ianfu) by the Japanese Imperial Army during World War II.

Ms. Kan Iltchul was born in 1928 and now lives in a small city near Seoul Korea in the "House of Nanumu (Sharing)." This house was founded in 1992 to be a safe place where former Korean "comfort women" could share their mutual experiences and support each other. Mr. Ippei Murayama, a young Japanese staff member working at the house will accompany her to Kansai. There will also be a movie screening at a different venue of My Heart Will Not Lose, a film about Sonshindo Halmoni, who was taken to China as a "comfort woman" She brought a lawsuit against the Japanese government for the atrocities committed against the "comfort women" during and around WWII.

The "comfort women" system was constructed during World War II as an explicit attempt to protect Japanese troops from venereal disease and shield women in conquered territories in Asia from rape by Japanese soldiers. The system would eventually enslave 50,000 to 200,000 women living in all parts of East Asia and Australasia to become victims of infectious disease and violence while not achieving any of the system's original objectives. Not all women sent overseas to serve the Japanese soldiers were abducted, however, once made a part of the forced prostitution system for the military, they were treated like indentured slaves based on a historical and institutional precedent marking women as second-class citizens. Towards the end of the war, "comfort women" were forced to provide free sex for kamikaze corps and to intercept telegraphs across enemy lines in the place of soldiers. Many "comfort women" were murdered because they were considered a liability or embarrassment if captured by the enemy. The Japanese government has yet to issue an official apology for the suffering that former "comfort women" faced and continue to deal with in their everyday lives.

Last year's events were haunted by the presence of extreme-right wing groups including Zaitokukai, intent on disrupting the event. Zaitokukai's membership is opposed to granting Zainichi Koreans and foreigners any "special" rights in terms of compensation, visas, et cetera. Next to their announcement of the event this year on their website, they have proclaiming "Let's pulverise the terrorists of the soul!"However distrubing their announcement be, their presence at the event shows the complexity surrounding the issue, and their desire to be involved in discussions. It is important to have meaningful dialogue with all parties involved in order to find the best solution- to discover the motivations for groups to resist a settlement in favor of the thousands of "comfort women." As Nelson Mandela has stated: "You make peace with your enemies not with your friends." 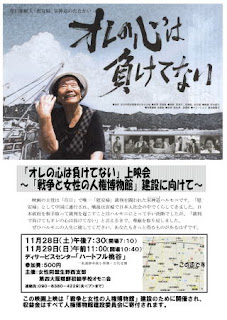