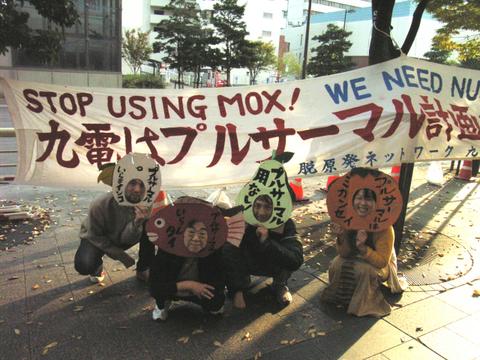 
Local opposition groups have set up tents for a 24/7 sit-in in front of the head office of KYUDEN (Kyushu Electric Power Co., Inc.) in the center of Fukuoka City, Kyushu. Over 460,000 citizens are demanding that use of MOX fuel at Genkai be suspended. 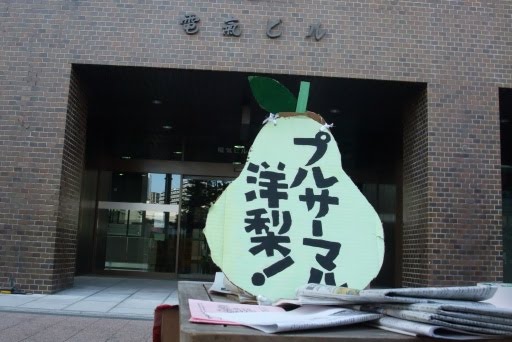 
They are protesting planned pluthermal (MOX) program at the Genkai nuclear power plant--in tandem with negotiations with KYUDEN and Saga prefectural government. (Kyushu Electric was one of the ethical Japanese utilities companies that cut crude oil imports from Sudan over concern about oil revenues being used to fund the Sudanese government’s genocide in Darfur --hopefully the company will listen to the voices of those who are concerned about the extreme dangers of pluthermal nuclear energy production to the lives of people living in Japan and nearby Korea).

“Pluthermal” is a Japanese word which combines two English words, the “plu” of “plutonium” and "thermal". Pluthermal refers to the utilization of 'plutonium' fuel in commercial ('thermal') nuclear power plants. The fuel is commonly referred to as plutonium uranium mixed oxide fuel, or MOX fuel. Many critics are saying the Japanese government is promoting this dangerous and expensive project because they want to lead in the world in advanced nuclear technology and then to export this to other countries, especially Asian countries. The Japanese government plans to introduce pluthermal to other nuclear plants throughout Japan (Fukui, Niigata, Fukushima, among other prefectures) despite widespread opposition by residents. The next target for pluthermal conversion is the Ikata nuclear plant in Ehime, Shikoku--located directly on an active tectonic faultline.

One of MIRAI's supporters is Aileen Mioko Smith, founder of Green Action: Working for a Nuclear-Free Japan. She is the wife of the late photojournalist William Eugene Smith, renowned for his photographs of victims of Minamata. Aileen is a dedicated anti-nuclear activist who has supported local opposition groups quite actively as well as she has a lot of data and information how pluthermal nuclear generation is extremely dangerous. (We are going to post on her work on this soon.)

The Steering Committee for MIRAI (Future) are posting reports of the protest on their website (only in Japanese, good photos). South Korean citizens are also very concerned--Saga is closer to South Korea than to Tokyo. No Base Stories of Korea has great background and coverage.

MIRAI and other local opposition groups are now collecting endorsements for their petition to stop Pluthermal Project before December 2--when KYUDEN is planning to start operation in full blast.

Please help stop pluthermal generation at Genkai nuclear plant by endorsing this PETITION. It will be submitted to the Japanese national government, Saga Prefecture local governments and Kyuden:

Both individuals and groups can endorse--please write the name of your country after your or your group's name. 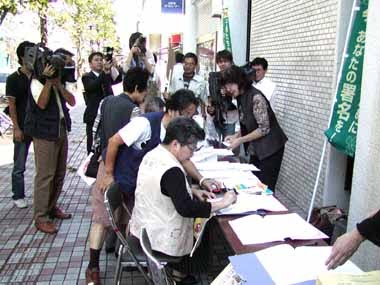 (Citizens in Kyushu signing the petition)


Already in Japan more than 670 signatures for the Japanese-language version of the petition were collected in only 2 days. From small local grass-rooted groups to large national organizations (including NGOs, social movements, trade unions, groups of young parents, food-safety groups, & consumer unions); organic food shops/restaurants; kindergartens, and rock-n-roll bands and artist groups have already expressed their support.

The English-language version of the petition will help demonstrate international concern about the dangers of pluthermal nuclear generation and solidarity with the over 460,000 people in Japan who want this plan stopped. 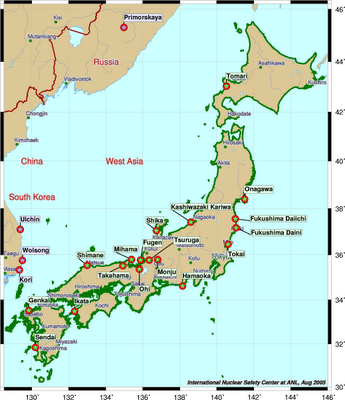 
(More about citizens' movements against MOX here at this Sept. blog,"Nuclear Status Industry Report 2009: The Renaissance of nuclear energy is much exaggerated (with the possible exception of Monju)." The blog spotlights nuclear energy analyst Mycle Schneider's report at the The Right Livelihood (Alternative Nobel) Award website:


The study provides the facts and figures of nuclear power around the world that fly in the face of the stunning international nuclear revival propaganda.

435 units operate in the world, that is 9 less than in 2002. For the first time in nuclear history not a single new nuclear unit in the world has been connected to the grid for over two years. One quarter of the units officially under construction have been listed there for over 20 years and over one half has had repeated delays. The economic costs have sky-rocketed rather than gone down as in the case of other energy industries.

Schneider won the 1997 Right Livelihood Award jointly with the late Takagi Jinzaburo, who invited Schneider to the 1991 International Conference on Plutonium in Omiya. The two saw similarities in France's and Japan's treatment of nuclear power; they began work together on the issues of waste and plutonium shipments between the two countries.


With Japan and France hosting the two remaining large-scale interests in plutonium use, and MOX (uranium-plutonium mixed oxide fuel) being the only use for plutonium outside fast breeder reactors (FBRs), Schneider started work with Takagi on a two-year intensive international research project on 'A Comprehensive Social Impact Assessment of MOX in Light Water Reactors', which was realeased in November 1997. In December 1997, France shut down its Superphénix FBR. In Japan, after several accidents and scandals, public confidence in the industry decreased dramatically.

Citizens across Japan have organized in opposition to Pluthermal, including the "Know Pluthermal" Shiribeshi Citizens' Network in Hokkaido, profiled at the Citizens Nuclear Information Center (CNIC) of Tokyo.)

It' great to see the happy faces of the people in Kyushu as they get together to stop the Pluthermal Project. I'm sure all of us will get energy from the strong protest over in Japan. Let's all sign the petition.