Satoko Norimatsu's translation of Muneo Narusawa's article: "What is happening to Hiroshima, the Peace City?" 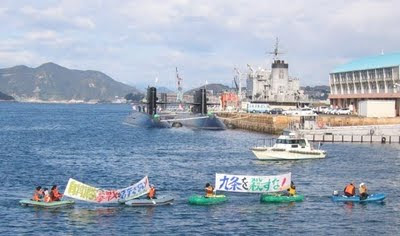 Protesters against "Towada," leaving for the refuelling mission in the Indian Ocean. The banners read, "Do not allow SDF to participate in the War!" and "Do not kill Article 9!" (Photo: Peace Link Kure)

Peace and intercultural educator Satoko Norimatsu's Peace Philosophy Centre blog based in Vancouver, Canada is the best blog on the interrelated issues of Article 9, peacebuilding and historical healing.

In two recent posts, Norimatsu translated and summarized a disturbing and compelling article, "What is happening to Hiroshima, the Peace City?" by journalist Muneo Narusawa published in the August 21 edition of the Weekly Kinyobi..

The first part describes the clash between peace activists and ultrarightists over nuclear policy:


Right-wingers' black-painted trucks violently drove into the crowd of people in front of the Hiroshima Peace Memorial Park. Those people were protesting against the event in which Toshio Tamogami, the former Air Self Defense Force Chief of Staff was going to give a talk titled "Doubting Hiroshima's Peace." These protester held a banner that said, "Hiroshima's Anger to Tamogami."

At 6 P.M., on August 6, 2009, 64 years after the first atomic bomb was dropped, this part of Hiroshima, "hibaku city"("bombed-city")and a symbol of the international peace and anti-nuclear movement, was thrown into an uproar with confrontation between right-wingers and peace activists. Tamogami was about to give a talk at a hotel close to the Peace Park. The talk was hosted by the Hiroshima chapter of "Japan Conference (Nihon Kaigi)," the national network of ultra-conservative organizations, which were connected to the ultra-nationalist politicians like Shinzo Abe, and Tomomi Inada.

Norimatsu notes that when Narusawa wrote this article, "It was just before the landslide defeat of Liberal Democratic Party in the General Election of August 30th. The LDP was behind all these nationalistic trends in the recent education, symbolized by Shinzo Abe's changing of the Fundamental Law of Education. Hopefully with the new DPJ-led government, things like the reduction in peace education and promotion of patriotism in education will subside. However, it will be hard to gain back what has been lost. Educators and policy makers in Hiroshima should know the global consequences of such moves. If we don't even teach the children of Hiroshima about Hiroshima, how would we expect children in other areas to? "

The second part of the summary describes how Hiroshima is surrounded by the US military and Japanese maritime SDF:


...Between Ujina Port and Kure Port, which is not far from the A-bomb Hypocentre, is a heavily concentrated military zone where one quarter of Maritime SDF (Self Defense Force) warships are based.

Kure Port is MSDF's biggest submarine base, and also one of the major bases for overseas dispatching of SDF troops. Since 2001, the replenishment vessel "Towada" departed from Kure for seven times for the refuelling mission in the Indian Ocean to support the U.S. military in the Afghan and Iraq Wars. This Spring, "Sazanami" and "Samidare," two destroyers were dispatched to off the coast of Somalia from Kure. As I walked along the shore line of Kure, I saw Stars and Stripes flaunting. It was the U.S. Army's Akizuki Ammunition Depot Headquarters. The Headquarters were instrumental in the Vietnam War, First Gulf War, the Afghan and Iraq Wars.

The rest of the article is a critical and reflective probing of the contradictions in Hiroshima's self-described identity as a "peace city:"


Hiroshima, the "International City of Peace," which calls for "abolition of nuclear weapons," is not just surrounded by these military bases with advanced "conventional" weapons, but troops have been dispatched overseas from its own backyard. "Hiroshima" never talks about these facts, let alone all the other wars going on in the rest of the world.

Norimatsu sees real hope for real change with the election of Hatoyama--not only because of the new prime minister but because his election has buoyed the many grassroots peace and democracy activists in Japan. She asserts that we "must eliminate war in our own minds" if we want to achieve peace in an interview for KJ's Global Article 9 issue.

Thank you Jean for introducing my translation of Narusawa's article on your blog. I thought the kind of information given in that article was rarely available and needed to be known outside of Japan.