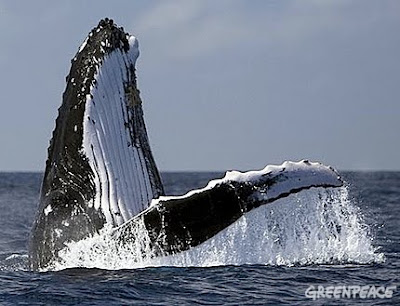 Humpback whale off the coast of Tongo (Photo: Greenpeace/Paul Hilton)

Greenpeace Japan has great news to share: the end of Japanese whaling may be in sight! At this link they have a wonderful video thanking their supporters and an action where supporters can send letters asking the Japanese Supreme Public Prosecutor's office to reopen the investigation into whale meat embezzlement:


A major review of Japanese government spending could spell the end to whaling in the Southern Ocean Whale Sanctuary.

Commissioned to cut wasteful programmes by Japan's new government, a review committee has proposed massive cuts in subsidies to a body which funds the so-called whaling research programme.

Without government subsidies, the whaling programme would be doomed...

In particular, two activists, Junichi Sato and Toru Suzuki, sparked a domestic debate in Japan in June 2008 when they revealed widespread corruption in the government-supported programme. They set off a backlash from powerful interests, and found themselves arrested for "stealing" whale meat which they had presented to police as evidence of embezzlement.

Junichi and Toru were arrested with the TV cameras rolling, and our Greenpeace offices were raided by police who seized supporter lists, documents, and computer disks in an attempt to intimidate our staff and supporters and deter our efforts. Junichi and Toru still await trial and face up to ten years in prison for the "crime" of exposing a misuse of public money.

But despite the charges, they have not been quiet. Both activists have spoken out against the cost of the whaling programme and the fact that only a handful of fat-cat bureaucrats really profit from the programme. Last year alone it cost 8 billion yen, or nearly US$90 million, to run the annual Southern Ocean whale hunt. Of that, 1.2 billion yen, or more than US$10 million, came from government subsidies. The rest is in theory covered by the sales of whale meat...

We first brought whaling to the world's attention in 1975 when activists put their own lives on the line by navigating small inflatable boats in front of the harpoons. We have opposed whaling operations in countries including Australia, Brazil, Chile, Peru, Iceland, Spain, Norway and Russia and exposed and shut down pirate whaling operations. Over the years, our tactics have widened to include consumer pressure -- which was crucial in getting western corporations such as Gortons Seafood to distance themselves from whaling, financially isolating the whalers -- and domestic efforts in Japan aimed at communicating the cost of whaling to the 71 percent of the Japanese public that do not support it. In 2008, we suspended our voyages to the Southern Oceans in favour of concentrating efforts on domestic pressure in Japan, including "Operation Silver Bullet" -- our ongoing investigation into whale meat embezzlement and scandals in the whaling industry.

Today, it seems that strategy is paying off. All of us who have worked together on this issue for decades are holding our breath -- that an end to Japanese whaling could well be on the way.

Posted by TenThousandThings at 2:43 AM
Email ThisBlogThis!Share to TwitterShare to FacebookShare to Pinterest
Labels: citizen action, dolphins & whales, Japan