Former Okinawa Governor Masahide Ota: The mega-military base proposal for Okinawa is not about security; it is about profit

Don't miss this powerful interview by Satoko Norimatsu with former Okinawa governor Masahide Ota, "The World is beginning to know Okinawa": Ota Masahide Reflects on his Life from the Battle of Okinawa to the Struggle for Okinawa," published at The Asia Pacific Jouranl.

Educated at Tokyo's Waseda University and Syracuse University, Mr. Ota was governor of Okinawa from 1990 to 1998 after retiring from the University of Ryukyus, where he served as Professor of Social Science, and Dean of the Faculty of Law. The 85-year-old now runs his own peace research centre in Naha, with six staff members; advocating on behalf of Okinawans unanimously opposed to the expansion of the already overwhelming U.S. military presence on their island. In this interview, Mr. Ota speaks about the "emerging movement for Okinawa’s independence; the controversy over forced mass suicides during the Battle of Okinawa; the “Futenma relocation facility” and media bias on the issue; growing worldwide interest in Okinawa research; and the importance of “making friends beyond the wall” to expand the network of international allies for Okinawa."

Here's an exerpt of Mr. Ota's commentary about the U.S. Marine Base Futenma and the proposal to construct a massive, new "replacement" facility in Henoko, an environmentally sensitive part of the island where locals have protested the plan for 14 years: 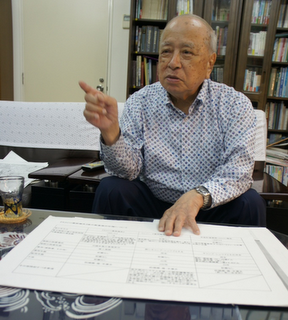 "The military base issue is not about security; it is about profit"

According to Colonel Thomas R. King, former vice commander of Futenma Air Station, the purpose of a new base in Henoko is not just to replace Futenma Air Station, but to build a base that has 20% more military power than Futenma. A base in Henoko would enable loading of ammunition on land and from the sea. The new base would also host a dozen or more MV-22 Ospreys. Ospreys, which have caused frequent accidents in the U.S. and beyond, are called “widow makers.”

King estimates that it would take two more years to make it possible for Ospreys to operate safely on and around the new sea-based facility, so the construction of the base could take 12 to 16 years in total. The cost of construction will be 10 to 15 billion dollars, and it will be as large as Kansai International Airport; enough to accommodate 35 aircraft. The annual maintenance cost of Futenma is 2.8 million dollars, but that for the replacement base in Henoko would be exponentially higher – as much as 200 million dollars. The runway of Futenma is 2,800 meters. The Japanese government announced that the new runway would be shorter, but according to King, the new base will be a lot larger.

Robert Hamilton, former company commander of Okinawa Marine Corps has written articles for the Marine Corps Gazette. In one of these, he argued that the Futenma replacement issue had nothing to do with security policies. The Japanese steel industry has been in stagnation. The top steel manufacturer Nippon Steel has been surpassed by a Korean firm. So the industry needs stimulus. Then Prime Minister Hashimoto endorsed a plan to build a base by placing tens of thousands of steel pilings on the ocean bed, put steel boxes on top of them, connect those boxes, and put hot steel plates to build a runway. According to Hamilton, this was designed to boost the Japanese economy, it was not based on the nation’s security needs. 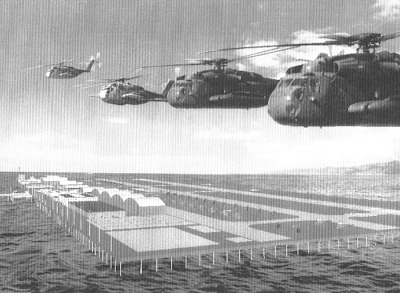 Hamilton is an engineer. He knows technical requirements. He says that specific kinds of rings are necessary to connect those steel boxes, and that the technology has not yet been completely developed. The technology is most advanced in the Scandinavian countries, and the U.S. Navy has invested 200 million dollars there in research and development of the rings. The kind of rings presently available are too weak to withstand the strong winds of Okinawa...

Former U.S. Deputy Secretary of State Richard Armitage said that the 21st century would be the century of “Mega-floats” (also known as Very Large Floating Structures, or VLFS), and endorsed the idea of a mobile base. Robert Hamilton in the article mentioned above says the idea of “Mega-floats” originally came from a man called Watanabe, in the Japanese steel industry, which works with U.S. military-industrial groups such as Bechtel. When I went to the U.S., twenty board members of the U.S. Chamber of Commerce wanted to meet with me. Somebody from the military industry proposed a drawing of a new base to me, but I told him I was in the U.S. to oppose base construction.

The Japanese steel industry just wants to make anything using steel. It is not a matter of national security; it is a matter of corporate interests.