Ainu Youth in Action: Exchange at the Burke Museum in Seattle, Washington 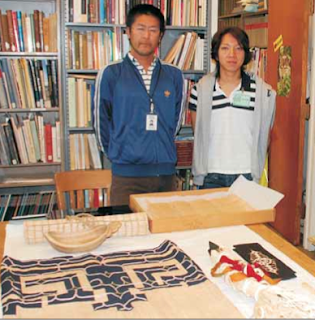 Seattle’s Burke Museum just recently saw off their two Ainu interns, Akira Kikuchi, 24, and Masashi Kawakami, 27, who participated in a first cultural exchange between the indigenous Ainu people and Native American communities in Washington state. (Click here for a previous post on the year-long exchange "to support the revival of cultural heritage of the indigenous Ainu people of Japan") The two interns developed an educational kit about Ainu heritage (available through the "Burke Box" program), curated a small exhibit of cultural artifacts and contribute to a documentary film about Ainu culture produced through the Native Voices film program at the University of Washington.

The interns' stay at the museum culminated in an exchange between 7 members of the Ainu community joined Tulalip Tribes in the Paddle to Makah through the Tribal Journey 2010. A video of the journey can be seen in below and exquisite photos of the canoe landing at Neah Bay and the Ainu's performance during the protocol ceremonies can be viewed at the Burke Museum Blog.

The work of Akira and Masashi, along with the support of the Burke Museum, is a testament to the vitality and renewal of the Ainu people.

- Posted by Jen Teeter
Posted by TenThousandThings at 12:00 AM
Email ThisBlogThis!Share to TwitterShare to FacebookShare to Pinterest
Labels: Ainu, indigenous