Mayors for Peace: U.S. Conference of Mayors calls to slash spending on nuclear weapons & redirect funds to needs of cities 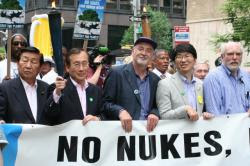 On June 14, Hiroshima-based Mayors for Peace congratulated the U.S. Conference for Mayors (USCM) for unanimously adopting a groundbreaking resolution, Supporting U.S. Participation in Global Elimination of Nuclear Weapons and Redirection of Nuclear Weapons Spending to Meet the Needs of Cities, at the conclusion of its 78th annual meeting in Oklahoma City


Noting that “cities have been hard hit by the recent recession which has left them with rapidly rising unemployment and declining revenues, forcing them to make severe cuts in critical public services such as police officers, fire fighters, teachers, medical and emergency workers and bus drivers,” the resolution provides that: “The U.S. Conference of Mayors calls on the U.S. Congress to terminate funding for modernization of the nuclear weapons complex and nuclear weapons systems, to reduce spending on nuclear weapons programs well below Cold War levels, and to redirect funds to meet the urgent needs of cities.”

The resolution also “calls on the U.S. Senate to ratify the new START treaty and the Comprehensive Test Ban Treaty without conditions and without delay,” and “calls on President Obama to work with the leaders of the other nuclear weapon states to implement the U.N. Secretary-General’s Five Point Proposal for Nuclear Disarmament forthwith, so that a Nuclear Weapons Convention, or a related set of mutually reinforcing legal instruments, can be agreed upon and implemented by the year 2020, as urged by Mayors for Peace.”

Noting that United Nations Secretary-General Ban Ki-moon “has announced that he will visit Hiroshima on August 6, 2010, the anniversary of the day the first atomic bomb was dropped, stating: ‘There I will say, once again, we stand for a world free of nuclear weapons’,” the resolution additionally “encourages President Obama, members of the Cabinet and Congress to visit Hiroshima and Nagasaki at the earliest possible date.

“This resolution is significant because it comes on the eve of Senate consideration of ratification of the new START treaty, as well as Congressional consideration of President Obama’s FY 2011 $7 billion nuclear weapons budget request,” said Jackie Cabasso, North American Coordinator for Mayors for Peace. “It also restates, in no uncertain terms, the commitment of America’s mayors to the global elimination of nuclear weapons at an early date, and for the first time calls on Congress to make deep cuts in nuclear weapons spending as a concrete measure of that commitment.”

The resolution notes that at the midpoint of the month-long May 2010 Nuclear Nonproflieration Treaty Review Conference “in connection with submission of the new START treaty to the Senate, President Obama submitted a classified report on a Congressionally-mandated plan to maintain and modernize U.S. nuclear forces for the foreseeable future,” at a projected cost of “well over” $180 billion by the year 2020. It further notes that: “Under this plan funding for the nuclear weapons research and production programs of the National Nuclear Security Administration will increase by more than 40%, from $6.4 billion in FY 2010 to $9 billion by 2018. In turn, $9 billion is 43% above the Cold War annual average of $5.1 billion for analogous Department of Energy nuclear weapons programs.”

The resolution recognizes that as we approach 65th anniversaries of the United States atomic bombings of Hiroshima and Nagasaki in August, “eight nations still possess a total of nearly 23,000 nuclear warheads – 95% of them held by the U.S. and Russia.”

The resolution cites a recent declaration by the International Committee of the Red Cross (ICRC) that because of the “unique destructive power” and “unspeakable human suffering” inflicted by nuclear weapons, “preventing [their use] requires fulfillment of existing obligations to pursue negotiations aimed at prohibiting and completely eliminating such weapons through a legally binding international treaty.” It recalls President Obama’s April 2009 acknowledgement in Prague, that “as the only nuclear power to have used a nuclear weapon, the United States has a moral responsibility to act” for the achievement of the “peace and security of a world without nuclear weapons. And it notes the USCM’s history of support for the abolition of nuclear weapons, including its 2009 resolution “call[ing] on President Obama to announce at the 2010 Nuclear Non-Proliferation Treaty Review Conference the initiation of good faith multilateral negotiations on an international agreement to abolish nuclear weapons by the year 2020,”

The U.S. Conference of Mayors is the official nonpartisan organization of cities with populations of 30,000 or more. There are 1,204 such cities in the country today. The final package of resolutions adopted at their recently-concluded annual meeting will be forwarded to Congress and the Administration in the hopes of shaping federal legislation.

Mayors for Peace is a rapidly growing international association, headed by the Mayors of Hiroshima and Nagasaki, campaigning for the global elimination of nuclear weapons by the year 2020. As of June 1, membership stood at 3,965 cities in 143 countries and regions. Members include more than half of the world’s 100 largest cities and nearly half of the world’s capital cities, with 157 U.S. members in 37 states. Past-President of the USCM, Akron Ohio Mayor Donald Plusquellic serves as a Vice-President of Mayors for Peace. Mayors for Peace has “Special Consultative Status” with the United Nations Economic and Social Council.