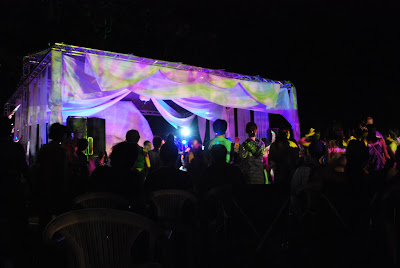 Similarly to other countries worldwide, Japan is home to an extensive lineup of summer outdoor music and arts festivals. A favorite event for festival-goers is the Hikari Matsuri, held in early August in Fujino, Kanagawa prefecture, which is located southwest of Tokyo along the Sagami River.

The festival features the usual fare of musical performers, international food stalls and nearby camping and onsen (hot springs) facilities. Additionally, the Hikari Matsuri offers a unique location: the grounds of a former elementary school, whose all-wooden buildings were converted in 2003 into an artists’ studio complex known as the Makisato Lab. 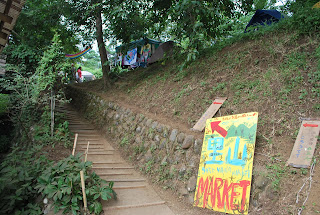 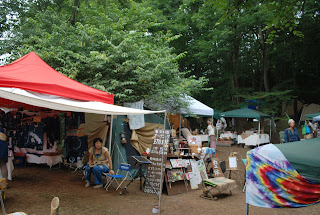 As its name suggests, the event also featured various impressive displays of light. Huge strobes beamed multi-colored patterns onto the surrounding trees, gorgeous installations of candles inlaid into clusters of bamboo tree trunks were placed throughout the grounds, and a dramatic fire dance performance took place on Saturday night—the highlight of the entire weekend for many.

The fire’s significance, however, went beyond simple artistic expression. All of the flames onsite were lit from embers of the fires in Hiroshima that followed the dropping of the atomic bomb exactly 65 years prior, which have been tended by Buddhist monks and other peace advocates ever since. 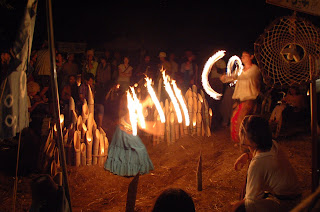 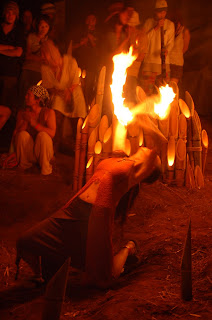 The festival’s opening ceremony on Friday evening featured a screening of the documentary film Atomic Flame (Japanese title: Gate), a project of the Global Nuclear Disarmament Fund that follows Japanese Buddhist monks as they walk across the southwestern United States to extinguish the flame at the Trinity test site in New Mexico where it originated. Festival organizers explained:

Gate will be shown on the outdoor stage, using solar powered electricity and candles to create a subdued, minimalist space where we may together call for peace. Truthfully speaking, there is not much more that we can do with regard to this issue beyond learning, thinking, feeling, and praying. While such actions may seem like trivial things, they are in fact immensely important.

The first speaker was Oyama Mikae, a member of the local NPO Transition Japan. The organization has gradually been recognized as an active hub of the international Transition Network movement, thereby earning the town of Fujino global recognition for its progressive action. The website describes the initiative:


A Transition Initiative (which could be a town, village, university or island etc) is a community-led response to the pressures of climate change, fossil fuel depletion and increasingly, economic contraction. There are thousands of initiatives around the world starting their journey to answer this crucial question:

In response to these environmental challenges, the Fujino community has begun holding regular workshops on permaculture and other sustainable practices, publishing a regular newsletter titled “Transition Fujino”, and spearheading additional initiatives designed to elicit peoples’creative ideas regarding how to live without depending on fossil fuels. An excellent article highlighting the Transition Intitiative project in Fujino—which, coincidentally or not, has one of the highest concentrations of artists in all of Japan— may be read here. 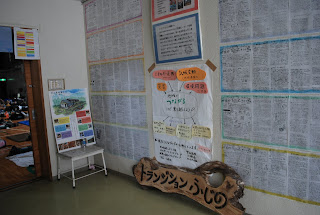 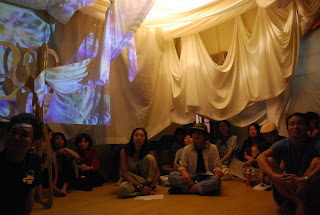 This presentation was followed by a screening of Hopi no yogen (The Hopi Prophecy), a 1986 documentary by Japanese director Miyata Kiyoshi. The film describes how the Hopi and Navajo tribes in the southwestern United States have responded to the resource colonization of their lands

that have been repeatedly plundered for plutonium and uranium, or—in their words—“carving out the earth’s vital organs.”

The film, a classic among social activists in Japan, recounts how tribal leaders—horrified after learning that plutonium and uranium taken forcibly from their land were used to create the atomic bombs that destroyed Hiroshima and Nagasaki—decided to go public with a prophecy that had been passed down from Hopi elders. The message described how humankind has now come to stand at the crossroads of two possible futures, depending on which actions are taken: one of total annihilation, and the other of peaceful sustainability. 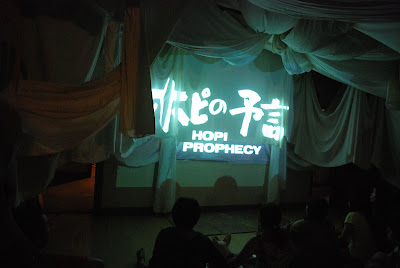 The last of the four messengers chosen to interpret the prophecies, Thomas Banyacya, tried repeatedly to reach decision makers with the prophecy, with little success. His obituary in The New York Times following his 1999 death poignantly describes his efforts:


Although he was often warmly received by United Nations officials, his efforts to give a speech were repeatedly rebuffed. But then, as he explained, the elders had told him to knock on the door four times. On his fourth attempt, in 1992, he was allowed to make a brief speech at the General Assembly hall, but on a day when the General Assembly was in recess. Only a few delegates were present when he carefully sprinkled cornmeal on the podium and then delivered his message stressing the need for world leaders to listen to those still living in harmony with nature. 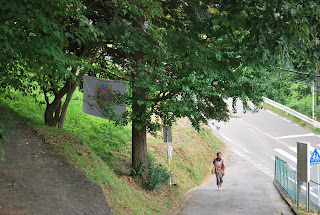 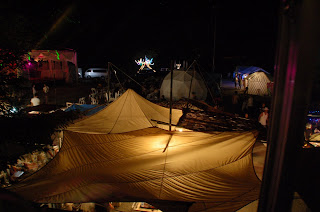 Right: Night view of the festival taken from the second floor of a former classroom building

As part of grassroots citizen efforts to promote sustainability and ensure that our future is the more positive of the two possibilities outlined in the Hopi prophecy,

Peace Not War Japan and the Neo Ryukyu
Arc network will continue their series of
Peaceful New Earth events to highlight efforts of indigenous cultures and fostering connections between peace movements. Read about the first two events in the series here and here. 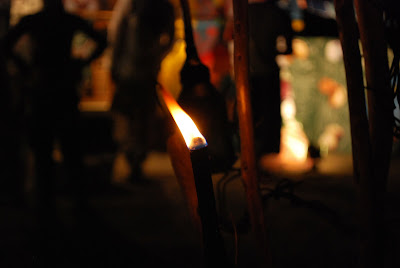 Thank you for your report and photo.

Thank YOU for reading, Hiroshi! :)

I wonder if the Hopi Prophesy is popular in other parts of Asia, or just Japan.

Interesting the festival of light... sounds magical, mystical, it's like when you are on the beach and sit in front of a fire and start to think to the point it became nostalgic.