Ikuo Hirayama, artist from Hiroshima: War is the "supreme folly of humankind"

Ikuo Hirayama passed away in December 2009, five months before the Miroku Project's Nara 2010: Conferences on the Future of East Asia, which he chaired, was to begin.

The renowned artist and Silk Roads preservation activist said that the wish for peace was the core of his work. His fervent quest was born when he was a fifteen-year-old living in Hiroshima on August 6, 1945. That morning, he witnessed the atomic bombing "like a flashbulb had gone off right in front of me." Suffering from radiation-induced leukopenia, Hirayama knew he wanted to work for world peace but did not know how to do this until his mind suddenly filled with spontaneous image of the Chinese pilgrim Xuanzang who defied his government to go in search of Buddhist texts:


As a child I suffered from the effects of the nuclear bombing of Hiroshima. This devastating experience has made me harbor a strong wish for world peace, just as I believe monk Xuanzang did. Identifying with him thus, I have wished to relive his journey of sacrifice and discovery along the Silk Road.

In following Xuanzang's footsteps across the Silk Roads, Hirayama realized the deep historical and cultural interconnections between Eurasia, Africa, and the Middle East, all the way to Japan:


What we call Japanese fine arts have their origin in China...If Chinese art objects of the early Tang age were excavated (in Japan) now, they would be taken for Japanese objects. With the passage of time, Japanese fine arts became recognizably different from Chinese fine arts, but in the Asuka, Hakuho and Tenpyo periods, that is, in the seventh century, the two were identical.

This realization of human unity helped to heal Hirayama's psyche and spirit. His journeys west also reinforced his knowledge of the devastation of war:


It’s no exaggeration to say that a culture can be wiped out in a second by war. Many ruins and remains found along the Silk Road are the result of war, the supreme folly of humankind.

It took the artist decades to recover enough personal strength to look backwards into his life, at what happened in Hiroshima. When he did, he was ready to portray the atomic bombing in his medium, Nihon-ga, the richly colored traditional Japanese paint medium using dry mineral pigments, which originated in India and was brought to Japan via the artist's beloved Silk Roads.

"Ikuo Hirayama says the wish for peace is at the core of his art work" by NPR's Robert Rand, published in 2008, explores Hirayama's peace activism through visual art and historic preservation:


Today, the Japanese city of Hiroshima is a thriving metropolis of 1.2 million that speaks with the rumble and squeal of streetcars and traffic. But on Aug. 6, 1945, an atomic bomb shattered the city, killing more than 90,000. Of those who survived, one man, Ikuo Hirayama, would go on to turn the devastation into art...

"There was a powerful flash right in front of me. I covered my ears. And there was a strong wind, and I squatted down and the wind went right over my head. And I then tried to escape through waterfalls of fire..."

Many of his friends died. Hirayama grew ill from radiation sickness and his white-blood-cell count plummeted, but eventually he recovered. He left Hiroshima, adopted Buddhism as a way of honoring the dead, and took up painting, practicing an ancient technique called Nihonga, in which colors are blended from ground-up mineral pigments, then attached to the canvas with glue.

Hirayama became famous as a painter of Buddhist images and of the Silk Road, the highway that brought Buddhism to Japan. His Silk Road paintings convey Hirayama's belief that the road, with its exchange of commerce and ideas, showed that cultures can interact constructively. The paintings epitomize a sense of hopefulness and cooperation, peace and tranquility, the antithesis to Hiroshima, 1945...

Two decades after the bombing, Hirayama finally returned to Hiroshima. He visited the city's Atomic Bomb Memorial Park, and found himself drawn by the hiss and flicker of a flame honoring the dead.

"I saw the color of the fire, which was orange. It reminded me of the day of the bombing, and I could not get rid of that color behind my eyelids," he says.

Hirayama immediately began sketching out what would become one of his most powerful works, a huge, six-paneled canvas called "The Holocaust of Hiroshima..." 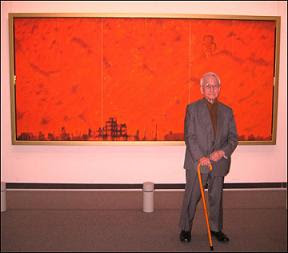 (Takato Kageyama, who lost his parents and two sisters in the bombing, stands before "The Holocaust of Hiroshima." Photo: NPR)

Hirayama says that despite the sorrow and destruction portrayed in "The Holocaust of Hiroshima," the painting offers a message of hope.

"The Buddhist god is telling everybody to rise like a Phoenix, to stand up and live for all eternity," he explains. "I believe that art can overcome hardships. I believe that flowers can blossom from anguish and inhumanity. You can overcome these things and make something beautiful..."

"I started to create my artwork as a requiem for those who lost their lives in the war. The wish for peace is at the core of my work," says Hirayama.