Michael Lujan Bevacqua on the U.S., British, & French nuclear bombings throughout the Pacific: "So Our Children May Live in Peace" 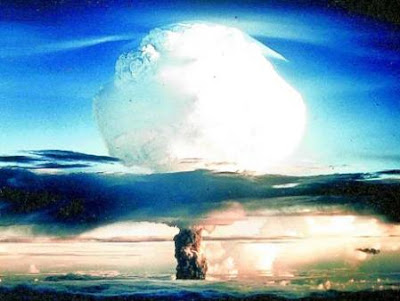 After the Second World War, the United States, France, and the UK detonated hundreds of nuclear bombs in a series of experiments that continued for decades in the Pacific region.

The U.S. vaporized one of the islands in the Bikini atoll and forced the indigenous inhabitants of Bikini off their islands after thermonuclear bombings rendered them unfit for human life. Bikinians were brought back to their home briefly, thereby exposed to dangerous levels of nuclear radiation, resulting in cancers, before they were relocated off the island a second time.

France continued its nuclear bombings of French Polynesia until 1995, sparking international outrage and condemnation. In 2006, the colonial power was confronted with evidence that its 210 nuclear bombings of its territorial possessions in the Pacific gave cancer to the indigenous inhabitants.

Masahide Kato, professor of political science at the University of Hawaii, called these nuclear test bombings on the sovereign territory of Indigenous Nations (including the 1,000 bombings of Shoshone homeland in the American Southwest) “undeclared nuclear warfare."

A sensitive essay from Chamorro scholar, writer, and visual artist Michael Lujan Bevacqua reminds us of the many nuclear bombing radiation survivors (and their descendants) who live throughout the Pacific. Originally published Aug. 17th in his Marianas Variety column, "When The Moon Waxes," and reposted at Guamology.com:


One of the reasons why I haven’t been posting much on Guamology lately is because I’ve been writing a regular weekly column titled “When the Moon Waxes” for the Marianas Variety. It runs every Wednesday right across from Dave Davis’ “The Outsider Perspective” column, which makes the Wednesday issue of Marianas Variety the most schizophrenic issue of the week.

The title of my column comes from the song Dalai Nene, which is the song from which I first heard the word “sumahi” which is my daughter’s name. The first line of the song states that I pilan yanggen sumahi, or when the moon waxes. Often times when I’m driving around with Sumahi, I’ll sing that first line from the song and then make up the subsequent lyrics, often times incorporating dragons, dogs and frogs who do hilarious and ridiculous things which Sumahi knows they aren’t supposed to do.

The column covers anything and everything. Since starting it last month I’ve written about decolonization, art on Guam, Chamorro dancing, nuclear weapons, Native Americans getting their land back, and even last week about puking on Liberation Day and the deep meanings involved with that.

This Wednesday my column will be about my recent trip to Japan where I attended the 2010 World Conference Against Atomic and Hydrogen Bombs, and gave many speeches in Hiroshima and Nagasaki on current events in Guam, especially surrounding the US military buildups here. While at this conference I got to hear so many stories from so many different countries, especially those from places which have been negatively affected by the use, storage or testing of nulcear weapons. My column tells the story of Paul Ahpoy, an elderly man from Fiji who was a sailor in the British Navy, who along with hundreds of other sailors, witnessed numerous nuclear tests in Kiribati. Like all other communities damaged by nuclear weapons, Paul and other veterans were beset by numerous invisible and unknown diseases, which would riddle their body with cancer, make them sterile, and even be passed down to their children.

I’m pasting a preview of my column below for people to check out. If you have any suggestions for future columns, please let me know!

“So Our Children May Live in Peace”

We on Guam should all know about the US testing of nuclear weapons in the Marshall Islands and its deadly and tragic legacy. It is something that this entire region should take seriously, and teach to students of all levels, alongside Columbus sailing blue oceans, Americans and their independence or Chamorros suffering in Manengon waiting for liberation. It is critical because that history of nuclear testing speaks volumes to the relationship Micronesia has to the United States, by making clear this region’s strategic value.

But, one thing that we should always keep in mind is that the Marshall Island weren’t the only place where nuclear weapons were tested in the Pacific. There were US tests in the Aleutians, French tests in French Polynesia and British tests in Kiribati and Australia.

At the 2010 World Conference Against Atomic and Hydrogen Bombs that I attended last week in Japan, I got the chance to hear the story of Paul Ahpoy who is a member of an association for veterans from Fiji who were adversely affected by the testing at Christmas Island in Kiribati. Paul, who was a sailor in the British Navy and witnessed 7 tests, described a test day as follows: “…we would line up on the beach and were told to obey orders from a loud speaker on poles nearby. With our groups of about 400 servicemen, none of us wore any special protective clothing or monitoring devices.

An airburst weapon would be dropped over the ocean about 12 miles away…, we would follow the drills, sit down, close your eyes, this would be followed by a searing heat flash, then sound waves enough to bust your eardrums. We would be ordered to stand up and turn around to see the huge moonlike object in the sky which then turned into a huge mushroom, blotting out the sun. We would then be yelled at to run for cover as strong winds blew in from the seas and black rain would pour down from the sky.”

Paul and other sailors were not warned about the radioactive materials they were transporting, nor the dangerous effects of the testing and were in fact being fed fish from the very waters which were being poisoned by the testing. For the past 50 years, these sailors and their families have struggled with unknown, horrible diseases, which have claimed the lives of their children in mysterious shocking ways or made them and their children sterile. It was common for them to kiss their children goodnight and find them dead in the morning having choked to death on their own blood. Paul summed up his own tragedies as follows: “Personally I have had 59 lumps removed from my body. I lost my daughter when she was 3 ½ years old. My son is sterile and I fully understand that I will never have a grandchild. “

Through their organization, the Fiji veterans won the right to sue the British Government for compensation last year. Despite this victory, they recently had to close their office, and as in all cases such as this, the more time passes, the more pass on and the heavier the burden is for those who remain.

Paul concluded his speech by recounting what these veterans were told prior to these tests; namely that what they were doing with these bombs was a great service to humanity so that all their children could live in peace. Prior to the US conducting their testing in the Marshall Islands, they told the people of Bikini a similar thing, that because of the tests their islands, there would be no more wars.

This is why, these tragic stories are so crucial for all of us in the Pacific. These tests were not conducted on the mall in Washington D.C., in Piccadilly Square in London or Les Champs Elysees in Paris. They were conducted in faraway, isolated islands where even if things went horribly wrong, who would really be affected? A few thousand people which as Henry Kissinger noted, no one gives a damn about anyways? Some sea turtles and some coral and coconut trees? In other words, these were places which matter precisely because they do not matter. The lesson here is that while geography is strategically important in today’s globalized world, so is smallness and invisibility.

While Paul was giving his speech, I had a copy of his prepared remarks in front of me. After remembering those words about the great service for humanity those tests meant, he choked up and he quickly ended his speech. I looked down at the text to see what he had left to say. It was just a single sentence, but perhaps the most important one considering his tragic tale. The last line of his speech was: “I now thank you all for sharing with me and hope that our combined efforts to remove forever all nuclear weapons from our planet becomes a reality, so our children may live in peace.”

For more info on the Britain's nuclear bombings of islands inhabited by indigenous peoples in the Pacific, see Britain's Pacific Nukes. This TTT post covers Vancouver-based film director Fabienne Lips-Dumas' 2009 documentary film Children of Armageddon/May the Bomb Be With You which explores interrelated contexts of the legacy of the thousands of worldwide nuclear experimental bombings of remote places and peoples, focusing on the Marshall Islands, French Polynesia, New Zealand, and Japan.
Posted by TenThousandThings at 12:05 AM
Email ThisBlogThis!Share to TwitterShare to FacebookShare to Pinterest
Labels: 2083 worldwide experimental nuclear explosions, Asia-Pacific, children, civilian victims of military violence, global hibakusha, indigenous, nuclear radiation, oceans, peace

It is truly mind boggling what was (is still being) done in the name of securing "peace" through weaponry. Thanks for this post.