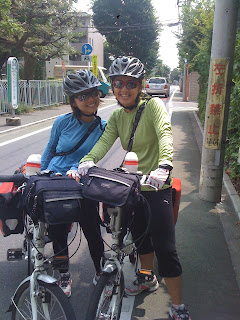 When Singaporean thirtysomethings Tay and Val took a 2007 vacation to Taiwan, neither had the slightest clue that events there would lead to both of them quitting their jobs and setting off on a five-year adventure around the world.

Following several years of direct employment with television companies, the pair—tired of industry demands—opened their own business in order to work as freelancers. Still, however, they found themselves at the mercy of managers who wanted nothing but a juicy story. “We were filming a show we had produced ourselves about a son reconciling with his parents—and the TV company actually chastised us for failing to follow him with our cameras when he finally took that courageous step back inside his family home,” recalled Val when I met the pair last month in Tokyo. “They had absolutely no respect for human dignity.”

Fast-forward to the Taiwan vacation, where the two had the misfortunate of arriving just as an unexpected typhoon hurled onto the island. As a result, nearly every accommodation option was closed, and they literally had nowhere to go. “We had basically lost hope of having a roof over our heads that night, when the tourist agency clerk pulled a final business card out of her file,” recalled Tay. “The encounter that ensued later that night changed both of our lives.”

“It was surreal,” explained Val. “We went from being stranded and afraid to suddenly finding ourselves on the shore of a beach, sitting inside an old train car that had been converted into a sort of motel, and being served hot, delicious food by the lone staffperson: an older man who looked like there was nothing he would rather be doing than taking care of our needs.

“He told us he had loved trains ever since he was a little kid, and after retiring, he decided it was time to fulfill his lifelong dream of turning abandoned train cars into overnight inns,” she continued. “When I heard his story, and saw how passionate and fulfilled he looked, for some reason something moved deep inside of me and I just started weeping. I knew right then that I needed to make some dramatic changes in my own life.”

The pair first decided to take an extended break from their exhausting lives in Singapore and accompany the man—whom they affectionately call Luo Papa—while he fulfilled his second dream: cycling across the whole of Taiwan to visit every train station in the entire nation. Just days after setting off, however, the plan had to be abandoned following the sudden death of his mother.

After thinking through their options, the pair decided to close down their company, sell all of their belongings, and revise their five-year business plan to do what they loved best: travel the world and share others’ stories through media such as blogs and video—thereby helping them to realize their own dreams. Thus, a new project was born: I Believe That Dreams Can Come True.

Take A Chance from iBelieve tt Dreams Can Come True on Vimeo.
Hilarious, heartwarming video of Vay and Tal’s mishaps
while setting off on their first cycling trip in Taiwan

While short on cash, the girls were rich in terms of creative thinking and strong existing networks within the Singapore business community. They determinedly set out—successfully—to secure sponsorship, for everything from cycling gear to video equipment to airplane tickets. “We created a website explaining our project, and a Singaporean guy who had previously done something similar got in touch with us and offered to help get us ready for the trip,” recalled Val. “He wanted to pay back some of the kindness he had received while on the road, and so he stuffed our packs full of gear and made sure our bikes were road-ready. We thought we were prepared, but in reality we were clueless! Truly, he turned out to be our lifesaver.”

For their projected five-year tour, the pair began in Taiwan, moved on to Japan where they will stay until the end of August, and will then head across the Pacific for a ride throughout North and South America. While the core theme of their project is realizing dreams, the focus and method differ from country to country depending upon factors such as language, interest, and access to support from volunteer sponsors.

“We are at a serious disadvantage in Japan because of the language barrier, and so we decided to make Project Japan focus on a segment of the community for whom words are not as important; the children,” Val told me while I was hosting the girls at my home for five nights as a small effort to help support their project. “They are just so intuitive, and so much can be communicated just through gestures and smiles.”

The Treasure In Our Hearts from iBelieve tt Dreams Can Come True on Vimeo.
Val and Tay’s first sharing session at a Japanese nursery

“In our first sharing session, we asked the children to tell us where their dreams were hidden, and several of them answered "kokoro no naka " (“inside your heart”)—proving that children are a lot more aware than we may think,” continued Tay. “We chose to work with disadvantaged children wherever possible, in order to help them express and work toward realizing their own dreams, despite whatever challenges they may be facing from the outside.”

Val and Tay’s stay in Japan has included several visits to nurseries, several sharing sessions at a summer camp for orphaned children living in special facilities, and presentations for business representatives to help secure sponsorship (as well as help adults to realize their own dreams as well).

“I was touched when I heard how Val and Tay’s encounter with the gentleman in Taiwan changed both of their lives, and the way their eyes shone when they told the story,” said one woman who attended a presentation given by the pair in Yokohama. “I am a middle-aged woman myself, but I still have hope of one day being able to realize my own dreams. I am also happy that know that the girls plan to continue traveling to other countries to help inspire more people to do what they really want to be doing in their lives.”

Val and Tay will share stories about their journey on Saturday, August 21st from 4 to 6 p.m. at Asante Sana organic café in Tokyo’s Meguro neighborhood. The following day, from 10AM to 6PM, they will be in the central square of Tokyo’s Yoyogi Park displaying an exhibition of messages that they have collected throughout Japanese cities to help inspire children here to reach their own dreams.

More information about Tay and Val’s project, and how to help provide sponsorship and support, is available on their website. 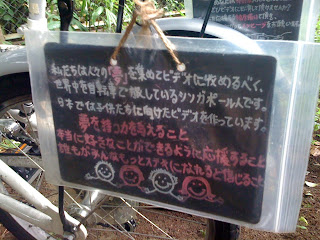 Message affixed to Tay and Val's bikes: "We are two Singaporeans on a world trip to make videos aimed at helping people realize their own dreams. While in Japan, we would like to focus on children: helping them to believe in the power of dreams, and to realize that they can do whatever they set out to accomplish!"