Ban Ki Moon: "...the real fantasies are the claims that nuclear weapons guarantee security or increase a country's status & prestige." 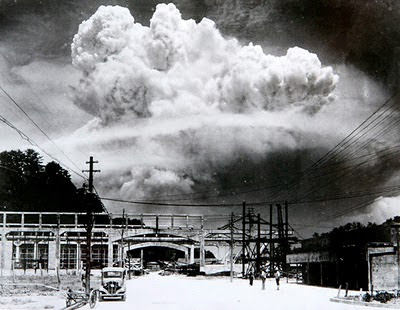 Photo of people walking a street in Nagasaki, unaware of the plutonium bomb explosion about to hit them.


"Nuclear disarmament is often dismissed as a dream, when the real fantasies are the claims that nuclear weapons guarantee security or increase a country's status and prestige.

"Let us be clear: The only guarantee of safety, and the only sure protection against the use of such weapons, is their elimination."

(The "Bravo" thermonuclear hydrogen bombing of Bikini Atoll in 1954 rendered what was left of the islands unfit for human life. Senator Tomaki Juda describes the devastation ("equal to 1,000 Hiroshima bombs) in "Bikini and the Hydrogen Bomb.") 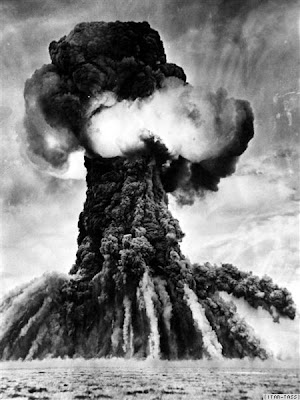 (First of 456 Soviet nuclear bombings in Semipalatinsk, in northeastern Kazakhstan in 1949. Photo: Nevada Semipalatinsk movement, International Campaign to Abolish Nuclear Weapons (ICAN). Togzhan Kassenova's "The lasting toll of Semipalatinsk's nuclear testing" published in The Bulletin of Atomic Scientists describes the legacy of these bombings which continued until 1989.) 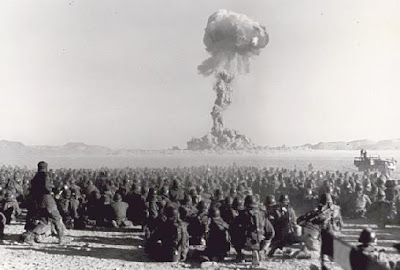 Photo of one of the above-ground nuclear bombings at the Nevada Test Site between 1946 and 1962 to which 250,000 American troops were exposed. In early 1953, the U.S. Department of Defense took control of the nuclear experiments from the Atomic Energy Commission, and moved soldiers even closer to ground zero.

The U.S. detonated nuclear and  thermonuclear bombs from July 16, 1945 ( the “Trinity” bombing at Alamogordo, New Mexico ) to September 23, 1992 ( the last bombing in the “Julin” series at the Nevada Test Site). The number of U.S. nuclear bombings in North America and the Pacific: over 1,000.

See also Joseph Gerson's "Abolition: The Only Path to Nuclear Security," and Hiroshi Taka's "Nuclear Abolition: It's Time to Get Serious."
Posted by TenThousandThings at 12:00 AM
Email ThisBlogThis!Share to TwitterShare to FacebookShare to Pinterest
Labels: civilian victims of military violence, Nagasaki, Nuclear-Free, peace