These photos, while obviously unable to capture everything that took place in Hiroshima on August 6th, 2010 (65 years following the atomic bombing), will hopefully impart at least a fraction of the peoples' desire for the abolishment of nuclear weapons, an aim that was palpable throughout the city during the entire day's events. 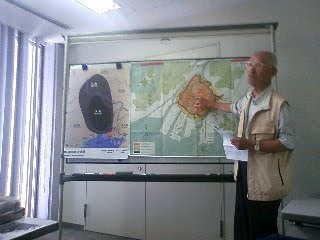 Mr Kazuo Fukushima, 78, gives a talk while showing a map of Hiroshima at a session held on August 7th in a room of the Peace Memorial Museum in Hiroshima. He is a hibakusha whose family ran an inn 250 meters west of ground zero, just over the river from the A-bomb Dome. The sole survivor of his seven family members, he had been sent to work in a factory a couple of kilometers away as a child of merely 13 years old. All six other family members were burned to death by the blast into bones so carbonized that no identification of the corpses was possible. 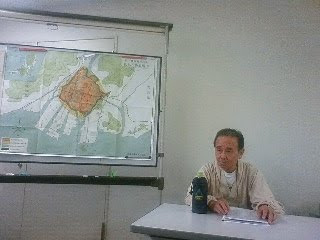 Mr Tetsushi Yonezawa, 76, the `miracle survivor of A-bombed streetcar'. On the morning of August 6, 1945, he boarded a tram leaving Hiroshima station that was blasted in the downtown Hatchobori district, 750 meters from ground zero. The more than 100 passengers in the train car all died instantly except for Yonezawa, the lone survivor. As a small boy of 11 years old, he had been protected by the bodies of the others inside the packed rush hour train, thereby escaping the fierce direct radiation. Although he was told that he would not live long, he is still alive and continues to tell his story. 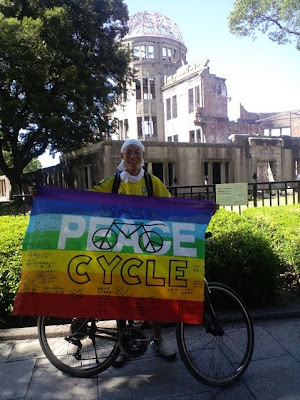 This youth, who is from Kyoto, embarked on a Peace Cycle beginning on Aug 1st from Nishinomiya-city to Hiroshima. He participated in a one-day friendship tour on August 5th to Iwaishima island, whose residents have been refusing a planned nuclear power plant by Chugoku Electric Power Company for the past 28 years.