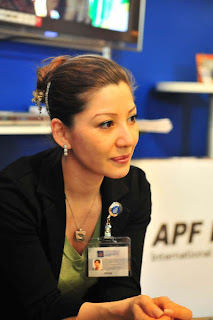 
Jewish-American writer and activist Anna Baltzer, on an international speaking tour, will be traveling throughout Japan this week to deliver a lecture titled "Peace and Human Rights in Palestine: Witnessing the Occupation."

During her presentation in Tokyo this Saturday, November 13th, Baltzer will be joined by journalist May Shigenobu, who will speak from her own perspectives as a Palestinian rights activist who grew up in Lebanon before relocating to Japan. Baltzer will speak in Kyoto on November 16th at Kyoto University.

The event promises to be an interesting and informative one, and the organizers welcome all interested persons to attend!

Access: From the North exit of Tobu Nerima station (which is 15 min. from Ikebukuro on the Tobu Tojo line), turn right at the first road (you will see Mister Donut on the corner). Daito Bunka Kaikan Hall is on the left side of this road after a 2-3 minute walk.

Anna Baltzer is a Columbia University graduate, former Fulbright scholar, and the granddaughter of Holocaust refugees. As a volunteer with the International Women's Peace Service in the West Bank, Baltzer documented human rights abuses and supported Palestinian-led nonviolent resistance to the Occupation.

She has appeared on television more than 100 times (most recently "The Daily Show with Jon Stewart") and lectured at more than 400 universities, schools, churches, mosques, and synagogues around the world presenting, "Life in Occupied Palestine: Eyewitness Stories & Photos," and discussing her book, Witness in Palestine: A Jewish American Woman in the Occupied Territories.

In 2009, Baltzer received the Arab-American Anti-Discrimination Committee's prestigious Annual Rachel Corrie Peace & Justice Award and a Certificate of Commendation from the Governor of Wisconsin for her commitment to justice in the Holy Land. She is a contributor to four books on the subject, including Shifting Sands: Jewish Women Confront the Israeli Occupation. She serves on the Middle East committee of the Women's International League for Peace and Freedom and the Board of Directors of The Research Journalism Institute, Grassroots Jerusalem, and Council for the National Interest.

For more information, please see Anna's website and her blog.

Anna will also present in several other Japanese cities during her tour of the country. The schedule for her speaking tour is available here.

May was born in Lebanon. She graduated from the American University of Beirut in Political Science and Public Administration, where she went on to become a graduate student in International Relations in addition to studying Journalism at the Lebanese University. She relocated to Japan in 2001, when she also obtained Japanese citizenship--having previously not been recognized as a citizen of any country. She now works as a preparatory school teacher and a freelance reporter for Middle Eastern television from Japan. She also regularly gives lectures and serves as a commentator on such topics as Palestinian rights, the Arab world and Islamic culture, and Middle Eastern-related political issues (including those relating to Iraqis and Kurds).

May is a doctorate candidate at Doshisha University in Kyoto, specializing in effects of Middle Eastern satellite broadcasting. She became an anchor in 2005 for the APF NEWS online program "The Olive Journal", and also worked as an assistant anchor for the Cable News Channel Asahi Newstar's program "Nyuusu no shinsou" ("In-depth News") until April 2010. She is the author of two books: Secrets - From Palestine to the Country of Cherry Trees, 28 Years With My Mother (2002) and From the Ghettos of the Middle East (2003). She is also featured in the film Children of the Revolution, which will screen later this month at the International Documentary Film Festival Amsterdam. More information is available here.