90,000 Okinawans attend massive April 25, 2010 rally demanding the closure of the Futenma U.S. Marine Base & opposing a "replacement" base in Henoko

From Martin Frid at Kurashi, two shots of the massive rally in Okinawa on April 25. 90,000 people attended. Many more intended to join the rally, but were stuck in traffic en route. 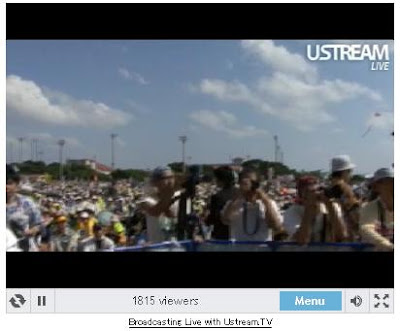 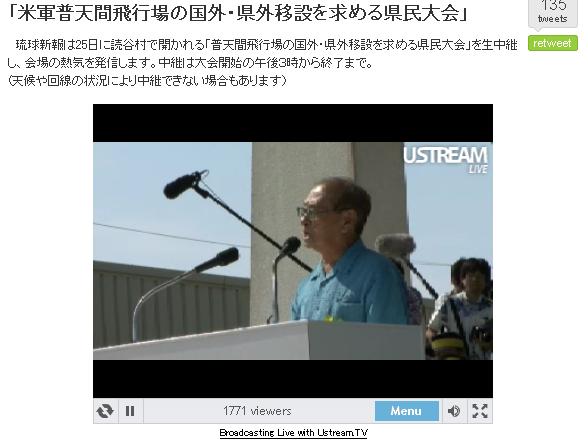 My husband said: "Governor Nakaima just had a loud voice."

Nakaima made two main points: elimination of Futenma danger, and reduction of base burden of Okinawans. Both ambiguous terms. He made only one clear point though: permanent use of Futenma could not be tolerated.

People's New Party's Shimoji, the only MP who was absent (Even LDP's Shimajiri was there!!!), could say all those things too and stay politically correct.

But again, any Nakaima is better than No Nakaima.

The three mayors, Iha of Ginowan, Inamine of Nago, and Shimabuku of Uruma, all made powerful and convincing statements, pretty much what they have been saying every day.

Japanese Communist Party's head Shii was there. He was the only party head present. I am disappointed Social Democratic Party's Fukushima did not attend.

All 41 municipalities participated: 39 mayors attending and 2 their reps.

The biggest significance was that this was the first all-party rally of this magnitude in Okinawa and Japan.

Posted by TenThousandThings at 12:43 AM
Email ThisBlogThis!Share to TwitterShare to FacebookShare to Pinterest
Labels: citizen action, democracy, Okinawa, peace