Via our friends at US for Okinawa:  findings and photos from Naha, Ginowan City, Henoko and Takae, Okinawa:


DAY 1: Up at 03:30 AM and off to Okinawa to experience what is really happening with our own eyes. There has been a lot of news recently dealing with the Futenma Air Base issue and what should/will be done in Okinawa regarding its relocation or closure. We are here to learn as much as possible while visiting the island, through interviewing locals and talking with those on the front lines, in order to make our own opinions on the subject.

Immediately upon arrival we noticed that Naha wasn't your typical airport. Self-defense and U.S. military planes line the runway while fighter jets screamed overhead and men with military backpacks wait in the airport for their flights. We tried to keep a tally of the number of military aircrafts that we heard; 6 helicopters and 4 jets in the first hour that we were there...we lost count half-way into the third hour. Emilie noticed how strange it was to hear but not see the various military aircrafts.

During a taxi ride I asked the driver how he felt about so many foreigners in Okinawa. His initial response was that he liked the business but upon further inquiry he admitted that he could do without the bases. 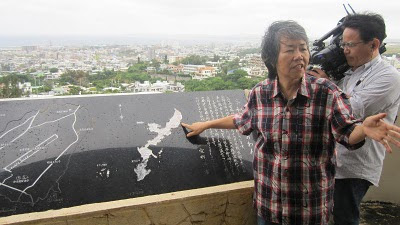 DAY 2: Upon viewing Futenma from an aerial perspective, we were struck by its location - right in the middle of the city. One member from US for OKINAWA, Danielle Pierre told us about her life growing up in Colorado Springs, USA, surrounded by various army bases, the Air Force Academy, and other military facilities, but she never felt that the military presence adversely affected her daily life. "I can't imagine, however, that the Futenma locals feel the same", she said. A sizable military base was placed right in the middle of their lives, bringing with it planes and helicopters that fly in a pattern nearly double the radius of the original agreement. Not only that, but a representative of Ginowan City Hall stated that these planes fly on average every 5 minutes near the base. Can you imagine trying to carry on a normal life with that noise?

Another shocking fact, upon many, that we learned from the Mayor Iha himself is how many accidents happen near Futenma...

Altogether, what we've learned so far highlights the necessity for Futenma to be closed. Having a conversation last night with a foreigner living in Okinawa reminded us that it is also important to think about what happens next, and not to leave Futenma in a vacuum after so many years of having a military base that stimulates the local economy. Thankfully, Mayor Iha has already taken sizable steps in the next direction. He explained his outline to restore the area to its original form, rebuilding a valuable avenue that was once lined with native pine trees and land that was once a source of livelihood for local farmers. 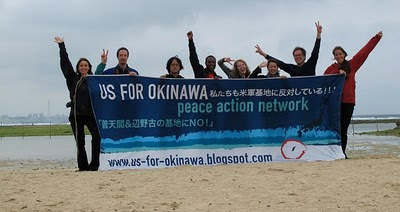 DAY 3: We left our guesthouse in Ginowan early in the morning and headed toward the Henoko region of Okinawa, where locals have been struggling for about 13 years to stop Futenma's Air Field from being transferred (along with a plethora of other new construction).

A number of different plans have been proposed over the past decade, starting with the construction of an air field inside of Camp Schwab, which is located on a cape in Nago City next to Oura Bay, Henoko. However, this plan was overwhelmingly rejected because it would simply transfer the problems of noise pollution and safety risks from Ginowan City to Nago City.

So the plan changed to a large airfield that would be built in a section of Oura Bay (right over its coral reefs!), but local people--mostly elderly men and women--resisted this plan so strongly (by holding daily sit-ins that continue even today, by occupying a platform in the bay that was erected to start planning the construction, and by paddling sea kayaks in the way of the motorized boats that came to carry out the construction) that it was finally scrapped.

Then the plan changed to expanding the perimeters of Camp Schwab so that it would extend out into Oura Bay, and building the runway on this extension. Locals have fought this plan, too, and now the government is talking about building the runways inside Camp Schwab--the very same plan that was rejected more than 10 years ago!

In Henoko, our first stop was to Tent Village on the shoreline of Oura Bay, where locals were marking more than 2,100 days of consecutive sit-ins. One of their representatives, Onishi-san, used photos to tell us about the history of their non-violent struggle (which, incidentally, was inspired by the non-violent resistance of Martin Luther King Jr.).

Then we walked over to a beach that is divided by a long stretch of curled razor wire that functions as a border to Camp Schwab. Peace lovers had covered just about every inch of the wire with colorful ribbons and banners calling for no war, no killing, no bases, protection of the dugong, and so on.

Apparently, the U.S. military used to regularly remove these ribbons (once, even by setting fire to them all!), but people kept retying them with such persistence, that the military finally gave up trying to remove them. One funny aside: on the way to the beach, we passed by a municipal sign that said: "Keep this beach clean--please take your garbage home with you."

To this sign, locals had pencilled in the word "base," so that it read: "Keep this beach clean--please take your base and your garbage home with you..."!

This training area occupies thousands of hectares, much of which wasn't being used, so the U.S. military finally agreed to give part of it back to Okinawa. However, the part they agreed to give back has seven aircraft landing pads, and the construction of 7 new landing pads elsewhere was made requisite for its return.

Unbelievably, the area chosen for the new construction is rich in biodiversity, and home to endangered species such as the Okinawan woodpecker and Okinawan rail.

Opposition to this plan finally led to it being discarded, and a new plan was drafted: this time the landing pads would be built around a small village of fewer than 150 people. However, this village is already surrounded by 15 other landing pads, and the people were opposed to more being built around them, because of the danger and noise problems that they pose. So they went to Henoko, and learned from the people of Henoko how to build a sit-in tent and carry out resistance activities.

Again, unbelievably, the government sued 14 people for stopping the construction work from beginning (charges were later dropped against 12), and the case is now making its way through the court. In other words, instead of using civil law to protect citizens, the government is using civil law to prosecute them, and our local guide explained that this sets a very dangerous precedent around the nation, because if it gets established, people who protest against things the construction of nuclear power plants or big dam projects in their communitities can also be sued by the government.

What's worse, the villagers are being sued under the Hatoyama administration's government, which is an enormous betrayal for them (and for us!), because they had voted for him and his party after he promised to lighten the burden of the military bases on Okinawa. We asked them if they planned to countersue, but they said it's difficult because their numbers are so small, it's difficult to balance a livelihood and stay fully active at the same time, all expenses would have to come from their own pocket, and it takes them 3 hours just to get to Naha, where the district court is located...

With heavy hearts, we left the Takae area and returned to the Henoko area just in time to participate in a peace candle night in front of Camp Schwab. Peace candle nights have been held in front of Camp Schwab every Saturday evening for the past 6 years, and were started by a base-protester who wanted to give young children and others who could not participate in physically risky resistance activities a way to get involved in the movement. The organizer explained that flames symbolized the soul, and that many souls have been lost because of the bases in Okinawa, given that they have been used to attack Vietnam, Afghanistan, Iraq, and other areas. So he taught his three young children to hold the candles carefully, and to see them as souls that need caring and should be cherished...

Afterwards, we headed to the guesthouse we would be staying at that night--a haven next to the sea that was lovingly built by a longtime base resister named Mr. Teruya. He built it largely from recycled wood, and decorated it beautifully with driftwood and polished glass he had picked up from the coastline. In the garden area of the guesthouse, an underwater photographer set up a screen and gave us a slideshow presentation of all the rich, beautiful life that can be found in Oura Bay, as well as in the mangrove lined rivers feeding into Oura Bay. It's hard to believe that anyone could consider pouring dirt and concrete over such rich and rare biodiversity--and of course, those who are proposing to do so are far removed from it, in offices in Tokyo and Washington. 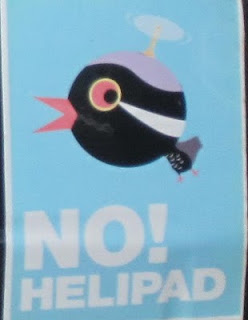 DAY 4: On our final day, we headed to the Save the Dugong Center to meet with Takuma Higashionna, who has been working tirelessly to protect the dugong and other sea life in Oura Bay and to raise awareness of the issue inside and outside Japan. He told us about how U.S. and Japanese officials always shift the responsibility to one another when he presses them about protecting Oura's biodiversity from base construction. Japanese officials claim that the U.S. is ordering the construction in Henoko and that they have no choice to follow it, and U.S. officials claim it's Japan that insists on this site and wants the construction for its security--so much so, that they are even willing to pay for it. Higashionna-san led us to a beach across the bay from Camp Schwab, and told us how he and others have dived extensively in the bay in order to map out all its coral reefs and delicate points in order to gain a better understanding of how to conserve its ecosystem and vitality. He looked across the bay and pointed to Camp Schwab, noting where its barracks, ammunition storage area, and firing ranges are located, and said it was his dream for Japan and the U.S. to one day work together to covert the camp into a nature conservancy center for all to enjoy and learn from...