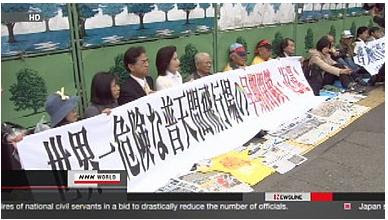 Via NHK, "Sit-in for removing Futenma base staged:"


Political leaders from Okinawa staged a sit-in near the Diet building in Tokyo on Tuesday, calling for the removal of a US military base.

About 70 people, including the mayors of Ginowan and Nago cities, and prefectural assembly lawmakers were fresh from a large anti-base rally in Okinawa on Sunday. The rally participants demanded the transfer of the US Marine Corps Futenma Air Station outside Okinawa, or Japan.

They sat down on the sidewalk in front of the Diet building and raised a banner to express their opposition to the relocation of the base within the prefecture.

Yoichi Iha, the mayor of Ginowan, which hosts the Futenma base said it will destroy the lives of residents in the neighborhood. He added that his city opposes the relocation of the base within Okinawa.

Iha complained that the media has been reporting that the base will eventually be moved to the Henoko area of Nago City in Okinawa but says such plan cannot be accepted.

The protestors appealed to passersby to understand the situation on Okinawa, where military facilities are heavily concentrated, placing a heavy burden on locals.

Posted by TenThousandThings at 11:40 AM
Email ThisBlogThis!Share to TwitterShare to FacebookShare to Pinterest
Labels: democracy, Human rights, Okinawa