Protest at the Japanese Diet: Voices from the Okinawa grassroots 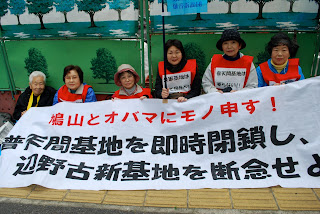 Yesterday morning, amidst cold and drizzly weather, more than 100 people gathered for a sit-in event at the Diet in Tokyo to demand policy changes regarding the issue of U.S. military bases in Okinawa. While a sudden downpour of rain sent many of the demonstrators temporarily scattering for cover during my time available for interviews, I was able to speak with several of them beforehand.

Okada Yoshio, a member of the Okinawa Citizens' Peace Network, told me that he and the other grassroots activists in his group had hoped to have an audience later that afternoon with officials at the U.S. Embassy to voice their concerns about American military bases in the region. The group was refused by Embassy officials, however, who said they would only meet with Okinawan lawmakers.

“While we certainly share many views with the delegation of Okinawan politicians, there are certain areas where our opinions as NGO members and citizen activists diverge from the official message,” he told me. “And since U.S. government actions have a direct impact upon average citizens, it was very disappointing that they were not willing to hear our views directly.”

While Okada and the other citizen network members considered staging a protest outside the U.S. Embassy during the official meeting, they ultimately decided upon a compromise course of action by convincing the official delegation to include one of their leaders, long-time activist Takazato Suzuyo, in the discussion with Embassy officials. 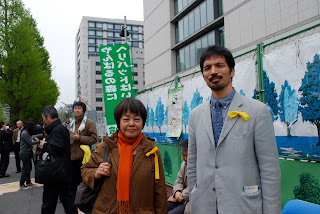 “Even the official Okinawa delegation was unable to meet with top U.S. Embassy officials, who were busy attending to the hurriedly organized visit to Japan by U.S. State Department official Kurt Campbell,” Okada added. “Since this visit was arranged immediately after the anti-base rallies were announced, it is more than obvious that the U.S. strategy was to try and neutralize this outpouring of discontent by getting to Tokyo with its message first—rather than waiting until public anti-base sentiment continued to grow.”

Also participating in the sit-in were citizens from Takae Village in the lush Yanbaru Forest, where construction plans are underway for six U.S. military helipads to accommodate dangerous Osprey aircraft training. While I was unable to locate anyone from their group following the rainstorm, the pamphlet they distributed reads, in part, as follows (translation mine):


When government officials came to Takae last February to hold an “explanation meeting” for local citizens about the proposed construction, they did nothing other than repeat the same phrases again and again. They had no clear answers regarding our pointed questions about things like the Osprey helicopter deployment, the flight path, noise problems, safety, etc. This meeting accomplished nothing beyond intensifying our already existing sense of distress.

The government officials acknowledged their lack of explanation, and said they would hold another meeting—but then added that in the meantime, plans for construction would continue to move forward. Clearly, these officials have no understanding regarding why any explanation is even necessary! If they wish for a peaceful solution to the presently continuing negative cycle of “construction without explanation” vs. “citizen sit-in protest”, they must desist their violent construction plans and begin engaging us in real dialogue.

Prior to the downpour, I was also able to speak with Uehara Seishin, an uchinanchu (Okinawan) with an extremely kind demeanor who has lived in Tokyo since the age of 17, but still maintains a strong connection with his homeland. He told me about a creative peace action spearheaded in 1990 by uchinanchu from around the world. In the hopes of fighting back against the U.S. militarization of Okinawa, 500 individuals donated 10,000 yen each (around U.S. $100) to purchase a small plot of land from a sympathetic landowner inside the gates of the Futenma Air Base. The group was later sued by the Japanese Department (now Ministry) of Defense, who has been pressuring them ever since to lease the land to the government.

“The land we purchased is only around 50 or 60 cm in length—maybe the size of a single sheet of newspaper spread out—but it happens to sit right in the path of a runway guidance light,” Uehara told me. “The government wants that piece of land, and it is exerting every ounce of power that it can to try and take it from us.” 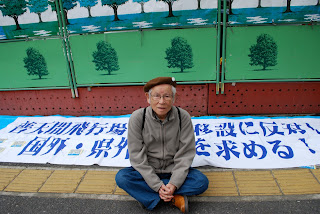 Activist Uehara Seishin, sitting in front of a banner protesting plans to relocate Futenma within Okinawa


“I lost my father during the war—he was back in Okinawa at the time, and we don’t even know what happened to him,” continued Uehara. “I have been an activist for peace ever since, and it makes me so angry that the Japanese government continues to create this false climate of fear to justify the military-based Japan-U.S. alliance when they could legally cancel the agreement today if they wanted to.

“The Japan-U.S. relationship is so unequal and so unfair…I wish more people would wake up and see this situation for what it is.” 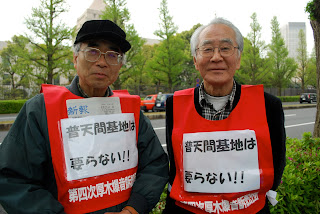 Citizens supporting the Okinawa protesters at the sit-in. As residents who live near the Atsugi Naval Air Station (also pictured at the top of this post), they are presently suing the Japanese government for noise pollution . “The noise is so bad that children suffer from insomnia and sometimes even nervous spasms—it is inhuman, and it just is not right,” one man told me. “We want people in the United States to know what we are suffering."