More Crucial than Ever: 2004 Appeal from the Article 9 Association warning Japan not to revert to a "war-waging country" 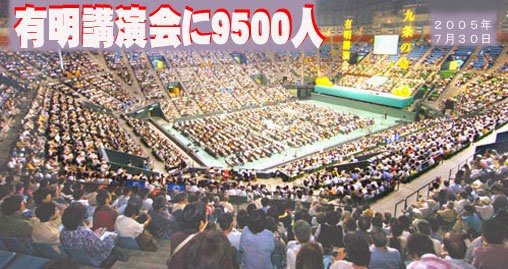 "An Appeal from the Article 9 Association", a group of Japanese intellectuals and writers (the most internationally renowned is Nobel Prize laureate Kenzaburo Oe) who support the Japanese Peace Constitution:

Through the use of weapons reaching the cruelty of the atomic bombs of Hiroshima and Nagasaki, the Second World War claimed over fifty million lives. As a result, the citizens of the world learned the lesson that resorting to force should never be an option, even for the purpose of resolving international disputes.

Bearing an enormous responsibility for having continuously pursued a war of invasion, Japan decided to work towards realizing this global vision, and thus established a constitution including Article Nine which stipulated the renunciation of war and of military force.

Yet today, half a century later, the movement to “revise” the Japanese constitution, and Article Nine in particular, has risen to the forefront with an unprecedented scale and intensity. The proponents of that movement intend for Japan to follow the United States and change into a “war-waging country.” For that reason, they authorize the use of the right to collective self-defense, dispatch the Japanese Self Defense Forces overseas, allow their use of force, and commit other such actions that, for all intents and purposes, violate the restrictions of the constitution. Moreover, they are trying to do away with such important measures and policies as the three non-nuclear principles and the ban on arms exports. Finally, in order to raise children to become leaders of a “war-waging country,” they are trying to change the Fundamental Law of Education. This essentially alters the state of the nation that the Japanese constitution has aimed to achieve, threatening to convert Japan from a country that strives to resolve conflicts without military force to a nation that prioritizes military action above all else. We cannot allow that conversion to occur.

The United States’ attack on Iraq and the morass of the occupation that followed makes it clearer to us day by day that the resolution of conflict through force is unrealistic. The use of force only results in robbing a country and its people of their livelihood and of their happiness. Since the 1990s, armed interventions by major nations into regional conflicts have also failed to result in effective resolutions. That is why, in such places as Europe and Southeast Asia, efforts are being strengthened to create regional frameworks that can help to resolve conflicts through diplomacy and dialogue.

Today, as we question our path in the 21st century based on the lessons of the 20th, the importance of grounding diplomacy on Article Nine emerges with renewed clarity. To call the dispatch of Self Defense Forces into countries that do not welcome it an “international contribution” is nothing more than arrogance.

Based on Article Nine, Japan needs to develop ties of friendship and cooperation with the peoples of Asia and other regions, and change a diplomatic stance that only prioritizes a military alliance with the United States. Japan must play an active role in the tide of world history by exercising its autonomy and acting in a pragmatic manner. It is precisely because of Article Nine that Japan can engage its partner nations in peaceful diplomacy while respecting their various positions, and collaborate with them in the fields of economy, culture, science and technology.

In order to join hands with all peace-seeking citizens of the globe, we feel that we must strive to shine the light of Article Nine upon this turbulent world. To that end, each and every citizen, as sovereign members of this country, needs to personally adopt the Japanese constitution, with its Article Nine, and reaffirm their belief in it through their daily actions. This is a responsibility that the sovereign members share for the future state of their country. Thus, in the interest of a peaceful future for Japan and the world, we would like to appeal to each and every citizen to come together for the protection of the Japanese constitution: You must begin making every possible effort to thwart these attempts at “constitutional revision,” and you must begin today.