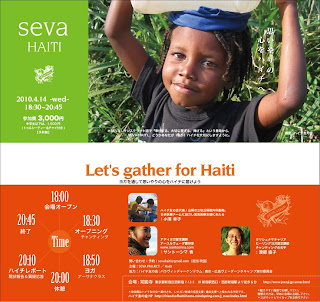 If it is true that tragedy’s silver lining is found in people uniting to create healing in its aftermath, one heartwarming example occurred last month in Tokyo’s Shinjuku district. A collection of NGO supporters, medical workers, yoga enthusiasts, and artistic performers gathered inside Joenji Buddhist Temple on a balmy Friday evening for a common purpose: supporting those who continue to suffer following Haiti’s massive earthquake.

“I have many close friends in Haiti, and felt so hopeless being unable to do absolutely anything for them following the disaster,” said event coordinator Miki Suita, who has spent considerable time in the country learning traditional Haitian dance. “I decided to engage my yoga community in a fundraising event organized around the concept of ‘seva, a Sanskrit word meaning something like ‘service’ or ‘caring for and cherishing others’, which also provided a natural way to connect with organizations providing humanitarian assistance to Haitans.”

The evening began with ethereal chanting from Shizen Yoga’s Nao Watabe, followed by a relaxing series of yoga poses led by seasoned yoga instructor Kaori Santosima. The group then moved upstairs for a passionate presentation by Sachiko Ozawa, a medical doctor from Yamanashi prefecture and the founding director of Haichi tomo no kai (Friends of Haiti). 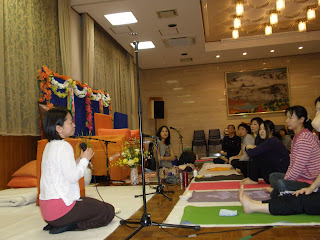 “Economic sanctions forced people in Haiti to cut down trees for fuel, resulting in severe deforestation that made the impact of this disaster all the worse,” said Dr. Ozawa, who flew to the country immediately following the recent earthquake. Her support for Haitians—which she described as her lifework—was essential following the disaster, particularly since she is one of only a few number of overseas doctors who speaks the Haitian Creole language.

Following Dr. Ozawa’s presentation, Suita danced to the backdrop of traditional Haitian drumming by Tokyo-based artist Gaku Watanabe, who explained that his rhythm was an invocation of the crossroads between dimensions, where mortals may greet both their ancestors and descendants. 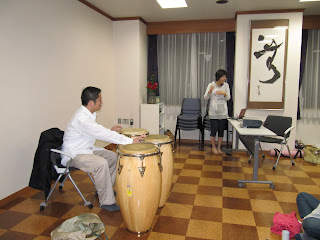 Proceeds from this creative, inspiring event, which included the sales of colorful postcards hand-embroidered by Haitian women, raised a total of 128,000 yen for Friends of Haiti’s ongoing work in the country.

Individuals interested in supporting their cause may find more information on membership, volunteering and contributions at the Friends of Haiti website.