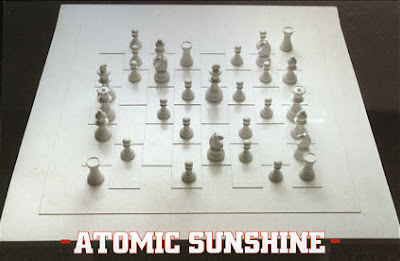 From an interview with Shinya Watanabe, "Into the Atomic Sunshine: Shinya Watanabe’s New York and Tokyo Exhibition on Post-War Art Under Article 9," posted at Japan Focus in 2008:


Question: Yoko Ono’s “White Chess Set,” first conceived in 1966, and also known as “Play It By Trust,” is the center of your exhibition. There are no black chess pieces, only white pieces, thereby eliminating the idea of an opponent or “enemy.” As the players get further in to the game, it becomes increasingly difficult, if not impossible, to distinguish whose pieces are whose. The idea of "us" and "them" becomes erased.

You wrote in the exhibition catalog that Yoko Ono was the first artist to "invert the notion of chess, to make it a metaphor for peace, rather than a game of conflict." This conceptual artwork is better known as "Play It By Trust," renamed for a 1987 tribute version created for the 75th birthday of composer John Cage. Would you speak about it and Ono's involvement with Article Nine and peace activism?

Watanabe: To be honest, I do not know her exact opinion on Article 9. However, her “Peace Art” aims at perfect and absolute peace, which is completely different from any other artist I know.

First of all, chess is a war strategy game. When the Great Tokyo Air Raid took place in March 1945, Ono was forced to evacuate from Tokyo to the countryside. She was twelve years old. Before the war, she was transnational, having spent half of her childhood in the United States, because of her family’s business.

Having grown up both in Japan and the United States, and having received both Buddhist and Christian education, she was able to acquire a broader worldview, which also appears in this artwork.

I think that John Lennon’s message on peace came from Yoko’s influence. My understanding is that John Lennon became a media advocate because of Yoko, to help broadcast her message of peace.

Yoko Ono is continuing her defense of peace at her beautiful website, Imagine Peace. Recent posts include "An Open Letter of Reconciliation and Responsibility to the Iraqi People" by Josh Stieber and United Nations Secretary-General Ban Ki-moon's address to the “For a Nuclear Free, Peaceful, Just and Sustainable World” International Conference at the Riverside Church on May 1.
Posted by TenThousandThings at 3:01 PM
Email ThisBlogThis!Share to TwitterShare to FacebookShare to Pinterest
Labels: art, Article 9, civilian victims of military violence, creativity, Japan, Nuclear-Free, Pacific War, peace, peace networks